#FireEmblemWeek in Review! How we Spent the Last 7 Days 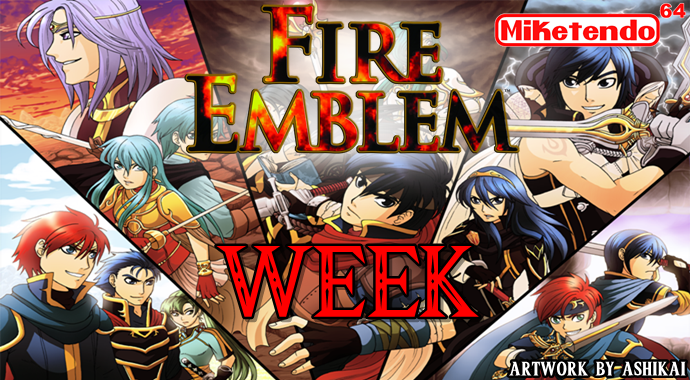 In case you missed it, the last seven days was #FireEmblemWeek here on Miketendo64 and what a week it turned out to be! Did everything go to plan like it was supposed to? No it didn’t, but then we did admit back when we announced #FireEmblemWeek that there wasn’t really much of a plan in the first place. Sure we had some ideas as to what kind of content we wanted to produce, but the majority of the time we just played it by ear and it was pretty great! We produced all kinds of Fire Emblem content, and still had the time to cover all of the very best Nintendo news there was!

So just what kind of Fire Emblem content did we provide? Allow us to walk you through it:

As far as Fire Emblem news and coverage goes, yeah we dropped the ball on the weekend. But then there was no real news shared during those two days and I made the mistake of taking a break and playing Heroes, which lead to me playing it for 5 hours straight on the Saturday and invested another 3 on Sunday. But you know what, this has been a fantastic week. Due to being hacked the week before, we lost a lot of followers, but #FireEmblemWeek saw our numbers grow more so than what they were in the first place and we produced a ton more content then expected, so personally speaking, I’m chalking #FireEmblemWeek up as a success. A success that got more views and attention than #ZeldaWeek.

So since this last week was a success, you can of course expect to see another Theme Week sometime in the future, but we promise you won’t have to wait for it as long as you had to wait for this #FireEmblemWeek. In fact we’ll be kicking off another Theme Week this month in fact because here at Miketendo64, we will of course be hosting #SwitchWeek. A week that begins on the 27th of February, ends on the 5th of March and is dedicated to all things Nintendo Switch. After #SwitchWeek, the only theme we are committed to doing is a #SplatoonWeek later on this year, (we’ll be arranging it to take place around the week Splatoon2 releases,) but if you have a particular game series you would like to see us dedicate a whole week to, let us know. After all, it if sounds good to us, you could expect to see it put into effect sometime in the next couple of months. So please have your say, we are listening.

But since #FireEmblemWeek is over, Miketendo64 will go back to our regular way of running things. Providing news coverage, making changes to our site, producing reviews, conducting Interviews and throwing out a feature whenever we can, whilst continuing The Miketendo Strip. So more of the same of what you saw this week, but just less focus on Fire Emblem.