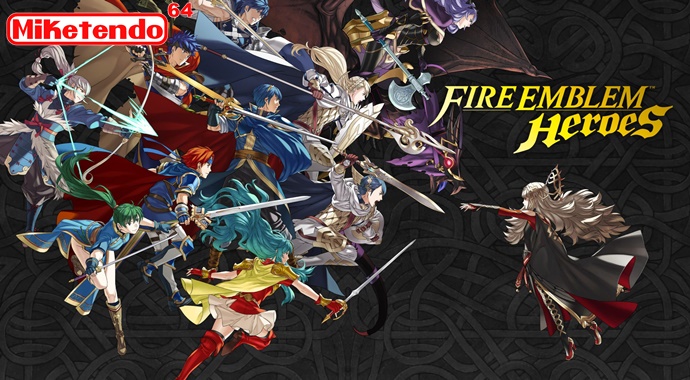 Ok, so after playing around with the app for the better part of a day, I think now is a good time to review Fire Emblem Heroes. To start off, I didn’t know what I was getting myself in for, as I have already mentioned before that I have never really played an FE game before (I shall refer to Fire Emblem as ‘FE’ for the duration of this review) so whether that works in my favour as an independent reviewer or not will depend on you. I like to think it will help make my opinions less biased as I will not be constantly attempting to compare it to the FE games on Nintendo consoles and instead review it for what it is, a Mobile game from Nintendo.

So, what is Fire Emblem Heroes? It is a turn-based strategy game where you must move your units around a map per so many squares and defeat all of the enemy units before they eliminate all of yours, think chess meets Warhammer. Each unit has a specific set of skills and moveset which may aid or hinder the flow of battle and it is your job as commander (or “summoner” as you are referred to in the game) to utilize each unit to the best of their abilities.

So let’s talk story. You are a summoner that has been given the power to summon heroes from all over the FE universe to stop Princess Veronica of the Emblian Empire for controlling all world including Askr where this game is set. You are recruited by Anna who is the commander of The Order Of Heroes and fight alongside new characters of the series, Siblings Prince Alfonse & Princess Sharena to rescue heroes of the FE series from their contracts with Princess Veronica and convince them to join your cause. The story is simple enough to follow and engaging enough to continue through Story mode to see how it ends as you fight to put an end to the Emblian invasion and find out the identity of the Masked Man.

As mentioned before, it is a turn-based strategy game that has you moving your units around a grided map to engage the enemy units and defeat them. It is a simple process but the challenge of the game is doing so without losing vital units that could be essential in achieving victory in each battle. From what little I have played of Fire Emblem Fates. The gameplay seems relatively identical and the ease of playing on mobile is simplified to the ability to use one hand if you want to.

Easy to learn, difficult to master isn’t really the case here but mistakes on some of the Special maps can cost you, literally, as some items that are required to continue playing after failure must be earned or purchased with real money. You can get around some of this with the new My Nintendo rewards that offer some of thes items for the cost of 100 platinum points or so but they are limited so once you have redeemed all you can from My Nintendo, you will be back to level grinding and credit card abusing.

FE Heroes has plenty of modes on offer including competing against other player’s teams in Arena Duels, or buffing up your team via Training Tower, taking on Special Maps for a limited time or going to the in game shop to buy essentials to max out your team members and make them stronger. If you are not liking your current team members, you can summon other heroes to join your team instead and train them up to make your team the best it can be. It is addictive and fun to play and can be played in small doses or long sessions depending on battery life and internet coverage. There are also Google Play Games functionality that also keeps track of game progress and rewards you for completing certain tasks. My Nintendo also has a similar feature that rewards you with Platinum coins which you can use to redeem FE items from the My Nintendo rewards page.

The graphics to the game are actually very good and clear. The levels may look relatively simplistic but still up to par with what you can expect from a mobile game. The Menu screens and text are very sharp & clear as are the characters in both sprite and avatar form and character attack animations are very fluid. In fact, I can’t find anything to really criticise about the graphics as even the movie sequences look stunning!

The music and sound effects are so good that it really captures the atmosphere of the game. The added voice narratives at certain points in the game help to make you feel part of the games as the characters talk to you personally rather than you as a character in the game. The music really does make it feel like you are playing something epic and that you are on a quest to rid the world of evil (at least it does with me anyway).

This is actually a very fun game to play and I have enjoyed it very much so. I am considering trying more Fire Emblem games when the opportunity presents itself and if you have yet to give Fire Emblem Heroes a go than be sure to do so as I give this cool little title…