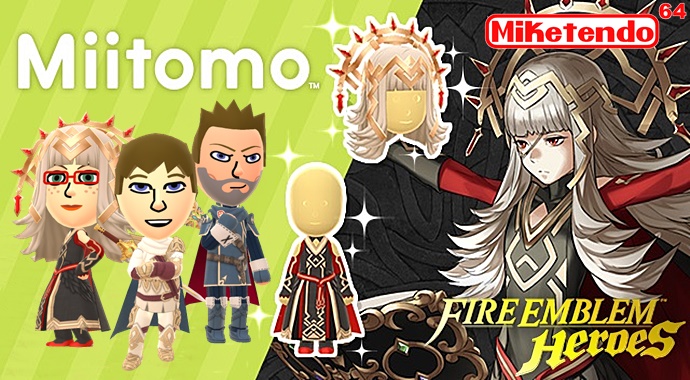 So my suspicions of there being a Miitomo/Fire Emblem Heroes, were spot on because the exact collaboration is underway this very minute.

But just before we do talk about the event, there is also a new update on its way to Miitomo (most likely going to go live sometime within the next week as they usually do after details on the update are shared,) so we’re going to include those here quickly. So this is what’s coming soon to Miitomo:

And now onto the collaboration. As always with these collaborations, there is a Retweet event and up for grabs this time is Lucina’s mask from Fire Emblem Awakening. The Retweet Event will run from the 2nd of February (yesterday) and ends on the 6th of February  at 6:59 a.m. PT. During that time players will need to retweet any of the tweets we have included below, and make sure they do simply retweet it and not retweet it with a comment:

Nintendo of Europe have yet to put out their Fire Emblem Heroes tweet, (probably because they are still waking at the time of posting this,) but as soon as it is live, I will add it to the list above. 10,000 Retweets are required for all Miitomo users to get their hands on Lucina’s mask.

Next up, because the event is happening right now, there are some character-themed items in the Miitomo shop that includes Alfonse’s outfit, Lucina’s outfit, Parallel Falchion, Fólkvangr, Marth tee, Roy tee Tiki tee and a Leo tee.

*These items will only be available in the Miitomo Shop from 2nd of February until 06:59 a.m. PT on the 2nd of March.

*This stage and its exclusive items will only be available from the 2nd of February until 06:59 a.m. PT on the 2nd of March.

If you were one of the many gamers who walked away from Miitomo, is this reason enough to bring you back to the app? It’s not the same as it was when it first release thanks to the big update and just as soon as the new changes are implemented, it’ll be even better! Plus we can no dress our Mii’s up as Heroes, do we really want to miss out on that? I sure don’t! Plus we need something to do whilst we wait for our stamina to replenish in Fire Emblem Heroes.