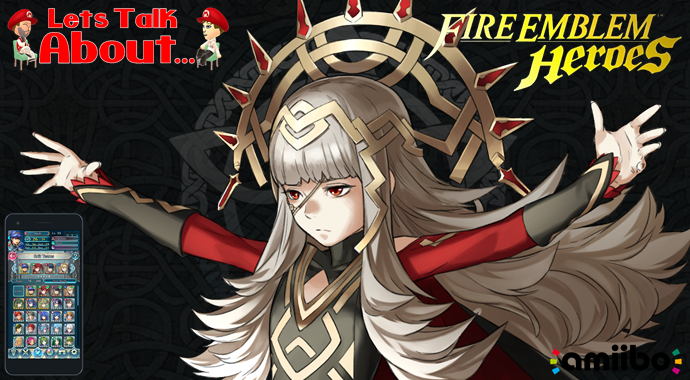 Let’s Talk About… Fire Emblem Heroes (Is it Any Good?)

Hi, I’m Jack Longman, and this is Let’s Talk About, a written Miketendo64 feature series, where I express my views and opinions on all things Nintendo! Be it a singular game, a game series in general, consoles or even Nintendo’s latest activities, you can count on me to talk about it! In today’s piece, it can be played one handed, it took its sweet time to release and it is out now in 39 territories!! Let’s Talk About Fire Emblem Heroes! (Again!)

In for a penny, in for a pound! It is #FireEmblemWeek at Miketendo64 and since I do love our feature series Let’s Talk About, here is yet another instalment just for this fantastic week. So now that we’ve got that out of the way, just like the title says, Let’s Talk About Fire Emblem Heroes! Is it any good? Well instead of this being one of those opinion pieces or editorials that drags the answer out in an attempt to make you read everything, this is an article where I will provide the answer first and then explain why my opinion is what it is!

My answer is “Yes.” Yes it is good and you know what? It does hold its own and in my limited Fire Emblem series experience/opinion, it totally holds up! (Any and all respect you had for me and my opinion just ceased then didn’t it? Don’t answer that.) While this instalment of Fire Emblem may not be a dead ringer for the original games, there is a lot of Awakening and Fates in Heroes, with plenty of old school charm for Fire Emblem veterans! Sure the story might not be great, in fact it is rather lacking in a number of areas, but then again, not every FE title can have an emotional packed story like Fates did and because of just how hard hitting it is, maybe it’s a good thing that this game is far lighter, some of us are still in recovery after all.

I will be honest though, I am not a fan of the whole “Heroes” thing. I don’t mind their presence in the game but the whole gacha mechanic and needing to summon them feels with Orbs feels a little grating. I get why it is present the way it is, because it is one of those things that makes Fire Emblem work as a mobile title, but since we get to face a lot of familiar faces during the main story, it does suck that we can’t at least recruit one of the characters we face. I’m not saying give us the Boss character we defeat on every final level of each chapter, but it would have been nice to add one of their retainers at least. However since there are Paralogue levels, maps that allow us to travel to worlds and meet Heroes we aren’t able to meet anywhere else, who knows? We might be able to recruit some of those Heroes, but since beating the story on Normal mode doesn’t unlock it, we won’t know for certain until it comes out.

Poor story aside and additional “New Game+” content (the Paralogues) that we are refused access to, if there is one thing Heroes does exceptionally well, it’s the fact that it has a lot of content and more is on its way as Intelligent Systems have confirmed regular content updates that will come every two weeks. But that’s neither here nor now, so let’s move onto the content we do have. There’s a PvP mode entitled arena, there is a daily event that will reward us a lesser Hero if we beat the map without losing a single Hero and there is the Training Tower! The Trainer Tower is the place to go to acquire the necessary materials to level up our Heroes, but given what we get compared to how much we need for the items to actually work (especially for ranking up), a hell of a lot of grinding is required and that’s where things get tricky.

Not everyone likes grinding, as it means repetitive gameplay, but this is a Fire Emblem game, and Fire Emblem games do consist of repetitive gameplay, as grinding is a must if you wish to beat the level you are currently stuck on, but I actually like the repetitive nature of this game. Yes grinding uses up a ton of Stamina, so much so we’ll probably end up using our Orbs to replenish our Stamina, just so we can keep playing and then buying more Orbs when the Orbs run out (not a necessary act, as it is a F2P game, but for those wishing to progress quickly and build their Dream Team, lots of in-game spending is the way to go.)

Heroes also has fantastic character art. The music is very Fire Emblem-esque, cut-scenes and dialogue can be skipped. There’s an auto-battle mode for faster gameplay and overall I feel Heroes does a fantastic job of summarising what a Fire Emblem game is. If you have never played a single game in the series, this game does a great job of introducing you to the series and explaining everything pretty much from the get go, so you know exactly what you’re in for. Plus if you don’t like the in-game purchases and would rather just play a Fire Emblem game that doesn’t feature a stamina bar, you can! 3DS has Awakening, Fates: Birthright, Conquest, Revelation and come May, it will have Fire Emblem Echoes: Shadows of Valentia. As for the Nintendo Switch, it too will have a Fire Emblem game to call its own in 2018 and if you can’t wait for that, Fire Emblem Warriors comes to both Switch and New 3DS later on this year as well.

In short, I am not a not a fan of the Fire Emblem series and I have played two games in the series now and while it has not converted me, it can convert others. Sure it has a crappy story and certain limitations, but Fire Emblem Heroes is actually a very good mobile representation of a series loved by many, and it is one that does the series proud and one worth downloading if you haven’t yet. That is all.

This has been yet another written Fire Emblem Heroes edition of Let’s Talk About. All views and opinions expressed are entirely my own and if you feel differently to anything I have said, then please by all means use the comments section below to have your say! I’d love to get your perspective on all this or you could give it a miss but recommend something else you’d like us to talk about instead! The choice is yours!