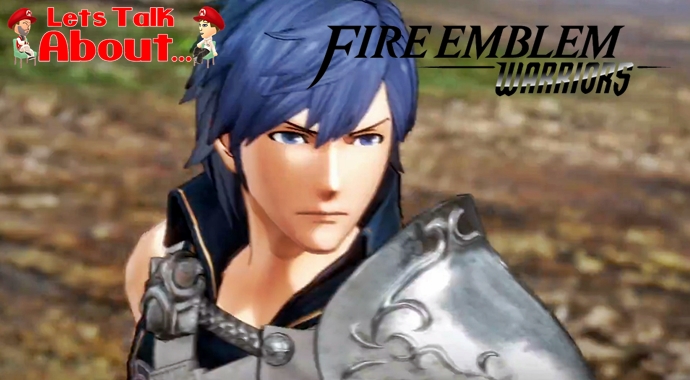 Hi, I’m Jack Longman, and this is Let’s Talk About, a written Miketendo64 feature series, where I express my views and opinions on all things Nintendo! Be it a singular game, a game series in general, consoles or even Nintendo’s latest activities, you can count on me to talk about it! In today’s piece, it requires a ton of button mashing, it is an instalment that is way overdue and it was leaked before it was revealed!! Let’s Talk About Fire Emblem Warriors!

This Fall will see the release of Fire Emblem Warriors, a game that will see another of Nintendo’s IP’s given the Warriors treatment, but before we even decide on which platform we’ll buy it for (Nintendo Switch or New 3DS), perhaps we should consider what we know about the game first. If we’re honest, besides the fact that it was official revealed and briefly shown off during the Nintendo Switch presentation before getting a bigger focus during the Fire Emblem Direct, very little is known about the game. Sure Chrom’s in it and it is rumoured characters from Fates and Awakening will get a strong showing, with older characters also present, but that’s pretty much it. We don’t even know its story and that’s not a good thing.

If we cast our attention back to Hyrule Warriors, (a hack and slash game released on the Wii U and then brought to the 3DS and New 3DS as Hyrule Warriors Legends), Warriors had a storyline that saw characters from previous games brought to together to unite when faced with a dangerous and knowledgeable enemy. Now while it would be one thing for Fire Emblem Warriors to mimic what they did with Hyrule’s story, they can’t when Fire Emblem Heroes has a story pretty similar to that of Hyrule. A story which we know will see the player able to summon Heroes (characters) from previous Fire Emblem games, as they fight in the war between Askr and the Emblian Empire.

And since Nintendo would certainly not let something like this happen in the same year, I think it’s safe to assume Nintendo (and Intelligent Systems as they are supervising Fire Emblem Warrios) have done what they could to ensure Fire Emblem Warriors will have a story that mirrors Heroes and Hyrule Warriors too much. So what does this leave us with? Well we know Chrom is in it and since Awakening characters are supposed to have a big presence in the game, maybe this is going to be a game that sees us return to the continents of Archanea and Valm, but also makes us of the Deeprealms as a means of justifying characters appearing from other games, as these characters could then be discovered in the Deeprealms, during levels that see you needing to go to a certain location for a certain reason and needing to rectify the problems the likes of Camilla has there before she will accompany you to fight your enemy and the struggles you face.

Since I do have a limited knowledge on the Fire Emblem series that is the best way I can see the story working and having sense, but what about the actual gameplay? How should the game handle? Well if it were up to me, I would take a lot of inspiration from Hyrule Warriors and Legends. There were many things I enjoyed from both games and were Nintendo, Intelligent Systems, Koei Tecmo’s Omega Force & Team Ninja were to combine them, but give them the Fire Emblem touch, then Fire Emblem Warriors will be a fantastic game for sure! So what is it I feel they should include?

Firstly Adventure Mode needs to be implemented, because were it to be utilised, it could be given the same treatment Hyrule Warriors Legends got, each map could retell the story of a previous game, much like the Link’s Awakening themed map did. It would then also open up the possibility that we could get dlc as well that offer more maps and like Hyrule, alternative costumes, better weapons and even additional characters.

Secondly, while Fire Emblem is typically a second player experience, the Switch version should definitely incorporate multiplayer like the Wii U version of Warriors, but at the same time, it, like the New 3DS version of Fire Emblem Warriors, both games should allow any player playing on their own, to take multiple units into battle and switch between them at will, by pressing their icon, or sending them to a certain position when interacting with map. While this was not a feature that was used for the Wii U version of Hyrule, it was in Legends and it was something of a game changer. But while such a mode should still be possible for the New 3DS version of Fire Emblem Warriors, but with no second screen as such, implementing such a feature wouldn’t be the easiest to implement, but it is still doable and if they haven’t implemented it yet, there’s still time.

Lastly, I want the My Fairy function to return, rebrand it as My Dragon and players will have so much fun, especially if the Fairies (now called Dragons,) were given a larger role to play (actually able to be summoned and attack enemies, as opposed to just using a spell). But just because I want something such as this, along with a number of other gamers, it’s no guarantee it will happen.

As Fire Emblem Warriors is concerned, while I may not be a fan of the Fire Emblem series, I do enjoy the Warriors games, enough to buy Fire Emblem Warriors for Switch on Day 1, but with the game expected sometime in the next 6-8 months, there is just so little we know about the upcoming game, but I do look forwards to finding out more about it, when Nintendo and Koei Tecmo deem us worthy of learning it’s story, but that probably won’t happen until E3.  But I will tell you something I do want to know and it is this, will Warriors include the likes of Alfonse and Sharena from Heroes, and will it include a character or two from the upcoming 2018 Fire Emblem Switch title. Would be great if it did!

This has been a written Fire Emblem Warriors edition of Let’s Talk About. All views and opinions expressed are entirely my own and if you feel differently to anything I have said, then please by all means use the comments section below to have your say! I’d love to get your perspective on all this or you could give it a miss but recommend something else you’d like us to talk about instead! The choice is yours!