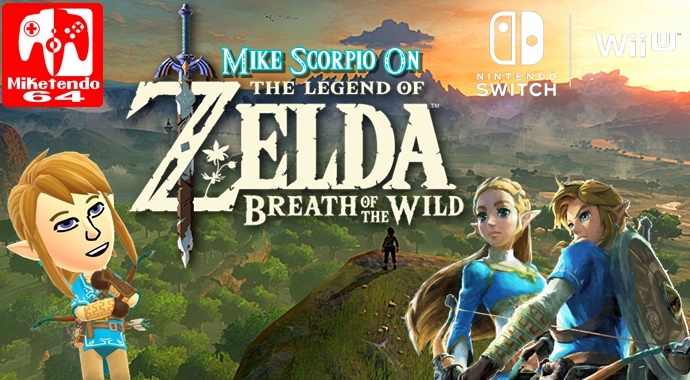 (Opinion) Mike Scorpio On Zelda: Breath Of The Wild

I have been trying to find the words to describe this game and the time to write them. Alas, I have finally managed to find both and will now take my time to express my thoughts about The Legend Of Zelda: Breath Of The Wild. I was never a fan of the name to start with and when the game was announced, I did feel a little disappointed that Nintendo’s biggest Zelda Game to date was named like a Discovery Channel Program. Name aside I still had high hopes for this game and the long wait that all of us Zelda fans have endured had me bordering fanatical obsession, constantly scouring the Internet for news that would shed more details about what was to be the best game ever coming to the Wii U (and the Switch).

With the exceptionally long wait and delays out of the way, we roll on March 3rd 2017 and I have since been obsessively playing for long periods of time (On Wii U) and after recapturing all 4 divine beasts and teaching Ganon a serious lesson in pain, along with completing all 120 shrines and obtaining all memories, I find that this is by far my most favourite Zelda game if not Favourite Videogame of all time, full stop. It is hard to say but Ocarina of Time has always been my favourite Videogame of all time but now it is clear to see that this is the Zelda Game I have always wanted and never realised it. I have played most Zelda games on home console and I love Ocarina Of Time for the adventure, Twilight Princess for the story and Wind Waker for its open-world exploration but what Breath Of The Wild Lacks in story, it by far makes up for it in Adventure and Exploration.

A lot of people that have had gripes with the game was usually due to the “Poor” graphics and opting for “Cel-Shading.” The graphic design never really bothered me and actually I prefer it because by taking some of the computer generated “realism” out of it, you feel the escapism of the game better and let yourself be taken in by the beauty of fantasy. Whilst it is true that sometimes there are frame rate drops that leave you on the edge of the seat as if the game has frozen on you, To be honest, it could be expected of any game and is not enough to critique the oustanding love and quality that has been poured into Breath Of The Wild.

Without trying to spoil the the game by giving away story details, I was initially uninterested in the story or the characters. The few cut-scenes early on in the game actually made me question myself if I actually wanted to save any of the characters, Revali is a utter Jerk that makes Groose look like a pushover and Princess Zelda is a spoiled brat and wants nothing to do with you. These however are red herrings and as you progress through the game, you will soon realise that there is so much left unsaid about the supporting characters that you are left wanting to know more. If Nintendo wanted, I would love to see an animated mini series that takes place 100 years before Link wakes up in the Shrine of Resurrection and develop the characters further and their relationships with each other, much like the Pokémon Generations series on youTube

With the Main quest out of the way, there is still so much to do and even though there are 76 different side quests and 900 Korok seeds to collect, the vast size of the world you are traversing holds many secrets and are begging to be explored. You can even become a homeowner and upgrade your house (to a certain degree). The world is truly your oyster in this game and there is no “One Way” to do things. If you want to climb a mountain, you go climb that mountain. If you prefer to walk up the path alongside said mountain, you can do that instead. Once at the top you want to paraglide all the way to the bottom, you can do that too. If you would rather shield surf all the way down instead for some extreme thrill of excitement, go for it. If you encounter an enemy camp, you can charge in like a crazed madman or stealthily take out the tower guards with your bow and then sneakstrike the other monsters whils they sleep. Or you can just fire a bomb arrow or fire arrow at a bomb barrel and watch all the poor little bokoblins run amok whilst engulfed in flames. You can almost do anything, except climb in the rain or mount Rhinos. you can mount Bears and even Lynels temporarily (Much to their displeasure).

The best part of this game for me is the Nostalgia. There are little easter eggs everywhere in this game, with names of places referencing characters or places from previous games. the subtle tunes hidden within the game’s Background music, like Zelda’s Lullaby when in the fields, Epona’s Song when at Stables, the Song Of Time when at the decayed ruins of the Temple of Time. The best of course is when at Hyrule Castle and you can here a remix of the original Zelda Theme Tune playing which really helps rev you up for your final assault on Ganon. However it isn’t just place names and Musical references but actuall places from previous games can be found as well, like I mentioned before with the Temple of Time from Ocarina Of Time, The remains of Lon Lon Ranch which has fallen into complete ruin. Along with the Goddess Springs being recreations of the Springs found in Skyward Sword.

The icing on the cake is that not only can Link get his own iconic Green Tunic but with the help of amiibo, he can also wear tunics from other games including, Ocarina Of Time, Twilight Princess & Wind Waker. Some people have even got their hands on the Skyward Sword Tunic & Fierce Diety Tunic via slightly unconventional methods but I will wait until Nintendo release the respective amiibo so I can add them to my increasing collection. With the option to wear almost any Tunic (and combine them with other items of clothing as well), you can literally make Breath of The Wild feel like a Spiritual Sequel to any of your favourite games in the series providing your favourites are Oot, TP, SS, MM or WW (Sorry for the anagrams). I am really happy to be able to play this game after such a long time of waiting and with DLC on the way to keep the game going even longer, I can’t wait to see what more is in store for Link in his most epic adventure yet.

Well thank you for listening to my thoughts on this incredible game, if you would like to share your thoughts, please be sure to leave them in the comments section below.


Categorised in: Breath of the Wild, Mike Scorpio, Miketendo64, Nintendo, Nintendo Switch, Opinion, The Legend Of Zelda, Wii U