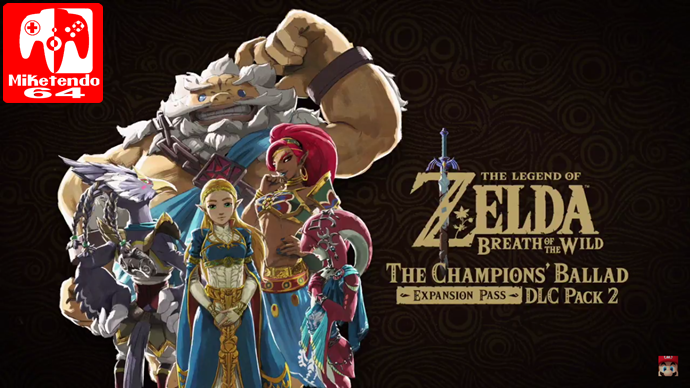 I was hoping there would be some The Legend of Zelda goodness shown at this year’s E3 and Nintendo did not disappoint.

In a new piece of footage for what is one of the best games on Nintendo Switch, it has been revealed that The Legend of Zelda: Breath of the Wild’s Summer dlc will toll out on the 30th of June, consisting of everything we have previously learned about, as well as giving a name to the other dlc pack (The Champion’s Ballad,) which will release later on this year.

More than that though, it seems more amiibo for Breath of the Wild is on its way after all, except instead of being a reprint, it’s new amiibo entirely and this time the amiibos are of the Champions from Breath of the Wild. (Daruk, Mipha, Urbosa and Revali). Given the recent demand for custom amiibo of these particular characters, I’d expect it won’t be too long before they are sold out, when they eventually release.

And because that’s not all, we also have the following fact sheet to offer:

The Legend of Zelda: Breath of the Wild game packs countless hours of play into a vast world of discovery. That makes it an ideal foundation for more adventures! If you own the full game, the Expansion Pass grants access to three new treasure chests, DLC Pack 1, “Master Trials,” and DLC Pack 2, “The Champions’ Ballad,” as they are released.

*For the sake of saying it, the Expansion Pass is also Compatible with the Wii U version of the game, as well as Switch.

We hope you enjoyed today’s Zelda news as much as we did.


Categorised in: Amiibo, Announcement, Breath of the Wild, E3 News, News, Nintendo, Nintendo Switch, The Legend Of Zelda, Wii U