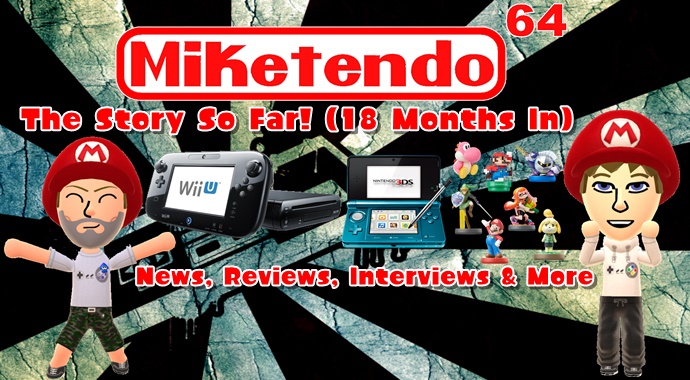 On this day exactly 6 months ago, our little site celebrated its 1st anniversary and Mike Scorpio and I were ecstatic about that and now another 6 months have passed, but just how did we do on our promises?

In an article I wrote 6 months ago, I essentially listed/promised everything we intended to do with the site in the months that followed and you know what? We actually came through on all of them! We promised more content and we have truly delivered on that. We brought in new regular features, we’ve posted news as it comes. Provided extensive coverage for E3 and Gamescom and we’ve even been posting a ton of exclusive content that includes interviews with Image & Form, Charles Martinet and even FDG Entertainment! So yeah, we more than came through with that promise!

We also promised more videos, which is another promise we have delivered on. Yes we didn’t do the whole “make a video every time an article reaches a certain number of views in a day,” but we have done more gameplay videos. Started a new video series that is still ongoing and we’ve also been sharing a whole load of videos to the site, the most recent of which being the latest episode of Pokémon Generations.

We’ve delivered on our promise of doing more giveaways and had more Theme Weeks as we went on to have a rather popular #PokemonWeek! Granted #PokemonWeek was the only theme week we’ve run in the last 6 months, but we have every intention of doing another one real soon and an announcement on our chosen theme could be coming sooner than you know, so definitely keep an eye out on that!

But yeah, I listed everything we were going to do and we did all of that and more, as we also attended our very first event (Barcelona Games World), we introduced features that worked and some that didn’t and we even got a comic going as well. We’ve also found the time to expand our team, watch our following grow daily and build a number of contacts that we never had before. Sure our views may not be the best in the world some days, but that’s only because we prefer to write an article that contains most, if not all the information in one place, as opposed to taking a leaf out of other news sites’ book and spread the information across two or more articles, in a bid to get more views. Content Quality over Content Quantity is the Miketendo64 way and that is the way it shall still be!

It might surprise you to know this, but what we do is not easy. We do get a lot of hate, we do get overlooked and the hours are long. It’s not just sitting in front of a computer, typing some words together, a lot of work goes into operating our little site, there’s coming up with new ideas, making time for videos, editing videos, handling the social media accounts, and a whole lot more. As someone who has written and published more than one novel, running a news site is a lot like writing a book. As a writer, the writing/content comes easy, it’s everything else that follows that is a hassle and distribution is always a nightmare. Being the size we are, we are often overlooked as readers would much rather get their news from the likes of Nintendo Everything, GoNintendo and My Nintendo News first and I wouldn’t blame you, they are good sites with good content, but they’re not us!

We have more of an old school way of doing things and we actually cover content that they don’t quite often, sometimes we’ve even beaten them to the punch with regards to big news and exclusives, but with us being small, and working hard on getting our name out there more, we do often get overlooked and our news does from time to time, fall by the wayside, until someone else with a larger following covers it but doesn’t source us. (I know for a fact this has happened on a number of occasions as two articles that did exactly that included the exact same wording as an article I wrote and posted hours/a day in advance.) But that is the game we have chosen to play and instead of letting it get the better of us, we chose to take it in our stride and carry on. Miketendo64 is here to stay!

So since we are sticking around, what our plans for the next 6 months? Allow me to summarise it for you in the simplest of forms:

*More Videos (Ours and Others)

*More of The Miketendo Strip (Be foolish to get rid of our Beloved Comic now that even Charles Martinet has seen it!)

Last item on the agenda for today, announcing which features we’ll be continuing and which ones we’ll be saying goodbye to/have already said goodbye too. We would love to keep them all going, but some just aren’t as popular as others, so until we do have a much larger following, for now some features just have to be discontinued so here are the features of Miketendo64 and their Current Status:

So with all of the above and the Nintendo Switch & Breath of the Wild releasing next year, the next 6 months are certainly going be some interesting times, but if you have a suggestion for something you would like to see us do here at Miketendo64, then get in touch and comment it now. Miketendo64 is always listening!