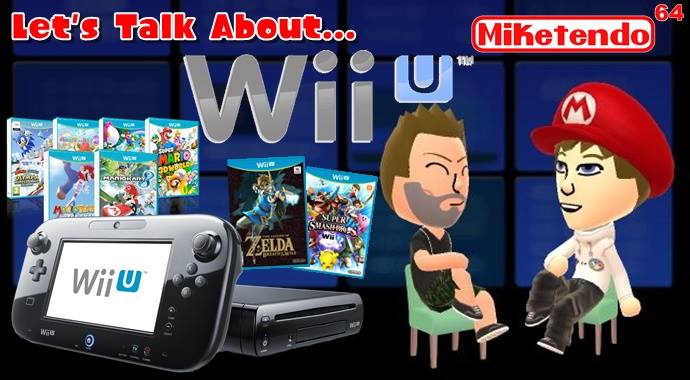 Let’s Talk About: The Wii U (And Why it Failed)

Hello and welcome to yet another instalment of Let’s Talk About, our series of discussion posts and videos dedicated to all things Nintendo! Be it a singular game, a game series in general, consoles or even Nintendo’s latest activities, you can count on us to talk about it! And since the last few instalments were videos, it’s time for a penned edition and today we’re talking about the Nintendo Wii U!

Originally released in 2012, the Wii U is now 4 years old and statically it is a failure.  Now I hate saying that because personally speaking, I really love my Wii U! Sure it may not be as powerful as the likes of Sony’s and Microsoft’s recent offerings, but it does offer a wonderful selection of games, now. Had the Wii U had the line-up of games it has now, it would have sold more consoles. Probably not enough to outsell the GameCube, but at least another 5 million and that would have been more than enough to change our perspective of it, but sadly that never happened, but why didn’t it?

But what makes the whole thing worse though is the lack of third party support the console had, not because there wasn’t much, but because of the reasons why. Believe it or not, the Wii U’s lack of performance power isn’t the only reason why so many established developers and indies overlooked the console. They overlooked it because of the lack of sales the console had. Had it have sold more, they’d have been more willing to port their titles to it, but had more of them ported their titles to it, more of us would have brought the console, resulting in a cruel Catch 22 that only sparked more Wii U hate  and poor sales. As with regards to power, maybe the Wii U would have been more powerful, if Nintendo actually focused on making it a true home console as opposed to a home console version of their handheld line. In a lot of ways, the Wii U is just a heavier 3DS that you can’t take with you on your travels.

It sucks the Wii U has done so badly, especially since the console does have some great titles. (Hyrule Warriors, Bayonetta 2, Splatoon, Super Mario Maker, Mario Kart 8 and Super Mario 3D World to name a few of them). There was even a ton of titles available via Virtual Console and a lot of indie support, so the Wii U does have quality games, it just doesn’t have the demand it deserved and now it has more competition than ever because Nintendo has unveiled the Nintendo Switch. It’s one thing to have the console struggle to compete against the PlayStation 4 and Xbox One but now it has to compete against its successor. Oh no, wait a minute! The Nintendo Switch isn’t its successor, it’s “something else entirely! Nothing to do with the Wii line whatsoever.” That’s what Nintendo have been saying for months now, but why do I find it so hard to believe?

Maybe I struggle to believe it because the Nintendo Switch looks exactly how the Wii U should have looked, but also comes with detachable controls that work a lot like the Wiimotes did for the Nintendo Wii. (For a console that has nothing to do with the Wii series Nintendo, you sure do know how to make it a perfect blend of the two consoles). Then of course there’s Wii U exclusive titles that are being ported to the Nintendo Switch, which are to be released as Launch titles for the new console, but as Director Cut editions. So essentially they’re the same game, with all the same content, except they’re five times better as Nintendo have improved visuals and more content. But then should we expect anything different?

Breath of the Wild was supposed to be a Wii U exclusive as well, except its also coming to the Nintendo Switch and since they were supposed to be Wii U exclusives, you would think Nintendo only way you could port them is if they were being ported to the consoles successor, but they’re not, they’re going to the competition. Now should the rumours be true, apparently Nintendo are attempting to broker a deal with retailers so that anyone who ones a physical copy of Mario Kart 8, Splatoon and Smash for the Wii U can take it in a store and trade up for the NX version. Now that’s all well and good and all, but then that means they won’t be able to play the game on their Wii U anymore. Just because the Director’s Cut editions may be better than the originals, it doesn’t mean we’ll want to stop playing the Wii U versions altogether and that’s actually one of the things I don’t like about the Nintendo Switch.

Although it may not sound like it, I do love the Nintendo Switch, I do, but I don’t see it as another Nintendo platform, I see it as someone like Sony seeing Nintendo coming out with the Wii U and its GamePad and retaliating by bringing out the sexy and sleek Switch. Yes it is innovative. Yes it is different and yes you could argue those qualities make it a Nintendo console, but at the same time, it doesn’t feel new and different at all, it just feels like Nintendo are ripping off their own creation. They created the Wii U and then they failed it, only to replace it with the Nintendo Switch, the console it should have been and make out that it’s “not its replacement.” So you know what, you want to call the Wii U a failure, go right ahead but just think about this, if Nintendo didn’t create the Wii U, they would never have gone on to create the Nintendo Switch, (at least not for another decade). So hopefully Nintendo really did learn where they went wrong with the Wii U because if they are not careful, the same will, not can, will happen to the Nintendo Switch as well and no, I don’t hate Nintendo. I still very much love the company and the things they do, but as a true dedicated Nintendo fan, I’m not afraid to speak my mind when I feel they are making some big mistakes.

So to summarise, the Wii U may have been a failure, but it was because of Nintendo failing to ensure the console hit its potential, but it is the beginning of what comes next and although I can’t wait for that time to come, my Wii U will be taking up a space on my desk until the day the console stops working. I love my Wii U and I am in no hurry to say goodbye to it!

This has been the written Wii U edition of Let’s Talk About. All views and opinions expressed are entirely my own and if you feel differently to anything I have said, then please by all means use the comments section below to have your say! We’d love to get your perspective on all this or you could give it a miss but recommend something else you’d like us to talk about instead! The choice is yours!