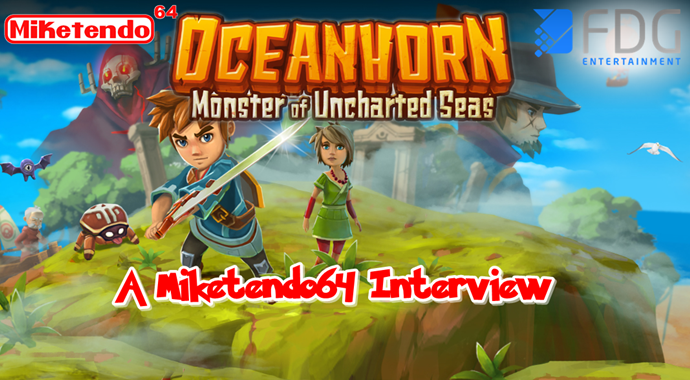 When I first saw Oceanhorn on Steam, I was in love. Sure it came to iOS smartphones back in 2013, but I’ve never owned an iPhone and I have no ever intention of ever owning an iPhone but now that Oceanhorn was playable on a platform I did have access to, it was the Pearly Gates of Heaven had opened. Only Steam is all well and good, but I prefer my Nintendo gaming so I purposefully didn’t play it in the hopes it would one day come to a Nintendo platform and guess what? That day is coming!

Sure FDG Entertainment have yet to confirm Oceanhorn is coming to the Nintendo Switch, but no one believes it isn’t and neither do we and since we have been in contact with FDG Entertainment the last couple of days, we actually got to ask Thomas Kern, the Producer for Oceanhorn a couple of questions and now we have those questions to share with all of you! Brace yourselves, for this is our Oceanhorn 1 & 2 Q&A:

Miketendo64: “There’s no denying how very similar Oceanhorn is to the Legend of Zelda. Was that the initial intention, or just something that happened along the way during development?”

Thomas Kern: “I would like to see Oceanhorn as a game that took inspiration of more than just Legend of Zelda. When we created Oceanhorn we took influences from classic Zelda, Final Fantasy, Seiken Densetsu and other old school Action RPG’s. The result, in my opinion, is very different to a classic Zelda game. The story takes an emotional arc like we’ve seen in Final Fantasy games, there’s voice-over cut-scenes and the game has a stronger focus on exploration rather than constantly solving puzzles. It’s a much more relaxed, RPG’ish approach to Zelda. You’ll also notice that the difficulty isn’t that high so everyone can enjoy the game after a hard day at work. Some say this is Zelda-lite, we say, it’s Oceanhorn!”

Miketendo64: “Despite Oceanhorn 2 being in development as we speak, Oceanhorn 1 saw a fairly big update in 2014 year. Could you ever see yourselves adding any additional content in one last update?”

Thomas Kern: “Oceanhorn is now complete and we have no intention to expand it further as the team is now focused on creating Oceanhorn 2. This is a big task for a small team and there’s hardly any time left to do anything else than that. However, we’re looking into upgrading the technical aspect e.g. for PlayStation Pro or Xbox One Scorpio. Also, our porting partner is hard at work to port the game to PlayStation Vita and other platforms.”

From Mobile to Home Console:

Miketendo64: “From mobile devices to being playable on home consoles such as the Xbox One and PlayStation 4, Oceanhorn has had quite the developmental journal. What have been the hardest things about porting the game to home console?”

Thomas Kern: “A lot had to be done from the graphical department. The mobile game had less polygons, animation frames and details. To go big screen we had to ramp up the graphics quite a bit. This job was started when Cornfox & Bros. worked on the Steam version of the game. Later, when we started our porting cooperation with Engine Software in Netherlands, we kept pushing forward. The result is that both console ports run in beautiful native 1080p and 60 frames per second. On top of that, consoles run the Ultra-settings from the PC version. It was very important for us to have great visuals and a rock solid framerate so that the game feels smooth with a very direct response.”

Oceanhorn was Never Considered for 3DS:

Miketendo64: “Whether or not you are able to comment on which particular Nintendo platform Oceanhorn is being ported for, can you at least tell us about when the decision to bring it to a Nintendo platform came to be and if a 3DS port was considered?”

Thomas Kern: “We never considered a 3DS port because the game wouldn’t run on this hardware. Maybe the New 3DS but we didn’t want to split our fans up into good/bad 3DS owners. However we love Nintendo which is the reason we announced it for an anonymous Nintendo console. I think it’s not that hard to guess which platform we’re aiming at.”

Miketendo64: “Interesting you say that about the 3DS, but fair point. Still a shame though. My News 3DS would have gladly welcomed the game.”

Miketendo64: “When Oceanhorn was initially developed, was the mobile market its intended platform, or was home console always the intention?”

Thomas Kern: “Oceanhorn was always intended as a mobile game. Only late in the production we realized that what we achieved would be perfect on big screen too.”

Miketendo64: “With Oceanhorn now playable on a number of platforms, which platform would you say plays it best?”

Thomas Kern: “It feels right at home on console. Both the PS4 and Xbox One Versions are the ultimate and best versions so far. The direct controls with a physical controller are a natural fit for a game like this. However, we still feel that our touch controls concept succeeded and the game worked very well on mobile.”

Plans for an Oceanhorn Retail Release is Being Considered!:

Miketendo64: “Being the Zelda reminiscent game that it is and the fact it is coming to a Nintendo platform, can we hope to see a retail version of Oceanhorn: Monster of Uncharted Seas, or will Oceanhorn only be available digitally?”

Miketendo64: “I know some gamers who’d welcome that news, if it goes ahead.”

Miketendo64: “Oceanhorn was hugely popular and well received, but was there anything you wanted to do with the game, but couldn’t?”

Thomas Kern: “We had even bigger plans with Oceanhorn like free-sailing, more Mini-Games and we planned a sandstorm for the withered lands. Ultimately we had to be more conservative in order to get the game finished. The main dev-team consisted of just 3 people and myself as project manager. 2 coders and 1 graphics artist. I was trying to help as much as possible by getting some external level designers and artists on board, helping with the story, getting Nobuo Uematsu and Kenji Ito, supervising the voice acting – but we could see our limitations. Anyway, we think the game turned out to be really good and very polished. We’re happy with the result.”

Miketendo64: “As the Producer of Oceanhorn, can you comment on how Oceanhorn will take advantage of the Nintendo platform it is released on and can you narrow down the release window?”

Thomas Kern: “At this time I can’t share any more info on the Nintendo release. Please stay tuned!”

Miketendo64: “Let’s do a little roleplay. You’re you and I’m someone who has never played/heard anything about Oceanhorn.  Just exactly what is Oceanhorn and how does it compare to most games in today’s market?”

Thomas Kern: “Oceanhorn is a classic retro action adventure game with direct, responsive controls but a modern tech approach. Think cartridge Zelda meets cartridge Final Fantasy but with modern graphics and sound. Classic and Retro because it’s not holding your hands constantly and it’s also not wasting time with tons of heavy menus and collectibles or crafting features. You switch it on and step right into the action like an early cartridge game which requires just seconds from switching on and playing the game.”

An Oceanhorn amiibo is Very Unlikely:

Miketendo64: “Shovel Knight remains the only indie character to have his own amiibo, with a Nintendo release in the future for Oceanhorn and possibly even Oceanhorn 2, is there any chance we could see an Oceanhorn amiibo?”

Thomas Kern: “I doubt it, to be honest.”

Miketendo64: “Other than Oceanhorn 2, are there any plans to expand the series and its story even more so, be it a comic, a book or even a third game?”

Thomas Kern: “We don’t have any further plans yet.”

Oceanhorn Sequel is More of an Oceanhorn Prequel:

Miketendo64: “Oceanhorn is getting a sequel with a different protagonist. Is there anything you can currently tell us about the new game and the world it takes place in?”

Thomas Kern: “Oceanhorn 2 takes the player back in time to where everything began. Please look forward to more details revealed in future announcements.”

I most certainly will look forwards to all future Oceanhorn 2 news, especially when there is a great chance both 1 & 2 could be releasing on the Nintendo Switch. What could be better than that? Sure most of my time will be spent playing Breath of the Wild, but there will always be time for Oceanhorn! But since I have said enough and Thomas has one last thing to say, here he is with a message for the fans:

“Everyone who loves Action Adventures needs to give Oceanhorn a chance and check it out. We’ve seen some critical critics bashing the game, comparing every inch with Zelda games but real players don’t care and just enjoy. The ratings on all store fronts are great with a very high average of 9/10. We made this game for 25+ audience who just want to enjoy a ‘not-too-difficult’ classic action adventure and have a really good time with it. This is for players who enjoy well polished, good sounding, very accessible games.”