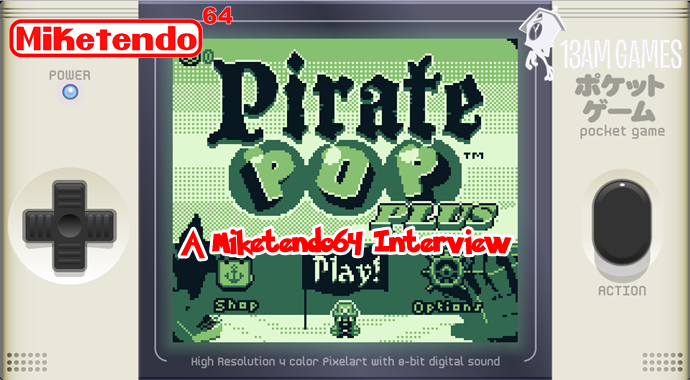 Pirate Pop Plus: A Miketendo64 Interview With 13AM Games

In the last couple of months, we have been able to do some great interviews.  First we discussed Shantae with WayForward, then we had a very informative interview with 13AM Games, which covered Runbow and 13AM Shipping Solutions, and then we kicked things up a notch. We Skyped Thunder Lotus Games, grilled Image & Form and got so much content it covered two articles but we also found time to talk to DrinkBox Studios, Thomas Happ Games and discussed the new Runner3 game with Choice Provisions. We also found time to do a HUGE interview with Rain Games as well. It really has been a busy couple of months and what better way to kick off October on the Miketendo64 site than to post yet another interview.

Undergoing my interrogation today is Dave Proctor of 13AM Games and I am very excited about that. Runbow is a great game and the guys behind it are some of the nicest guys I’ve spoken to this year. They’re also responsible for bringing Pirate Pop Plus to the west, but that’s not the only reason why I’m excited about this interview. I’m excited because when I first spoke with Justin of 13AM Games, although Pirate Pop Plus did come up, at the time there wasn’t much the guys can say about Dadako’s creation. But now a couple of months have passed, a demo of the game has been playable at events such as Gamescom and PAX West and the guys at 13AM have been able to talk more about it too, so for the first time on Miktendo64, we conducted a follow-up interview to learn more about the game and our questions got answered:

Miketendo64: “As far as Pirate Pop Plus’s release for Wii U, 3DS and Steam concerned, will it be a simultaneous release or one platform after the other? And are you any closer to a release date for the game?”

Dave Proctor: “We are very close to the release date announcement. Due to some of the lessons we learned with Runbow, we don’t want to announce a release date until we are 100% confirmed to be through certification which, (because of the high-traffic pre-holiday testing time for Nintendo’s Lotcheck department,) we are not there yet. That being said my hope is that the answer to this question is completely irrelevant by the time this goes live and we’ve announced a release date for Wii U, New 3DS, and Steam. I can confirm this: Wii U and New 3DS will be simultaneous because we are offering a cross-buy… buy one SKU and get the other for free!”

Pirate Pop Plus & Runbow Playable on Smartphones is Not 13AM’s Primary Focus:

Miketendo64: “Among its many features, one is Pirate Pop Plus being described as a customisable Pocket game, and mobile phones are often kept in pockets. Has there been any talk about also trying to bring the game to the mobile market or is it solely going to remain on the platforms already announced?” (Wii U, 3DS and Steam)

Dave Proctor: “There has. One of Hawken’s earliest designs had the game working for mobile. We aren’t saying no to anything yet, but we do consider 13AM Games and 13AM Shipping Solutions to be a console-focused studio.”

Pirate Pop Plus will Appeal to All:

Miketendo64: “Being so the game is a retro styled title, something that could limit the number of gamers it would naturally apply to, how do you see the game doing post-release?”

Dave Proctor: “Well, for starters, I’m not sure that the retro-style will limit appeal at all. The game is really fun. I mean REALLY fun. We had to stop people from testing it too much in the office because you just do not want to stop playing. Hawken (the developer at Dadako) made an AMAZING game. As for release, we are hopeful to bring this to a pretty wide range of eyeballs and rely on the fact that once you see it you’ll get it, just like we did with Runbow. We wouldn’t have taken on the title if it was something we didn’t think people would love.”

13AM Games’ Involvement with Pirate Pop Plus:

Miketendo64: “Besides publishing the title and bringing Pirate Pop Plus to the West, just how far does your involvement in the game go?”

Dave Proctor: “We actually did a lot of work with Hawken on Pirate Pop Plus, from recommending some subtle ideas all the way up to QA testing (and like I said above, we did a lot of QA testing.) In the game, Hawken designed a system where you collect coins to customize your on-screen handheld device (cheekily called the “Pocket Game.”) When we were talking about it on one of our many Skype calls we all agreed another fun thing to customize would be adding music tracks the player can unlock (sort of like the old Fever / Chill settings in Dr. Mario) to change the background tunes while playing. Hawken already had some awesome tunes made by Harry Waters, and he reached out to Matthew Ivic and GYMS. We, in turn, looked to our brilliant friend Dan Rodrigues who made the soundtrack for Runbow, and got him to commission a couple of tracks. It was great: Dan had to learn Famitracker because Hawken and Harry were adamant that all the music be representative of what you would have heard on an original Game Boy.”

Miketendo64: “So very involved then, something I’m sure will delight your fans to know.”

The Other Characters of Pirate Pop Plus:

Miketendo64: “Besides Pete Jr., Pirate Pop Plus features other playable characters. Can you reveal any further details on these other characters? (Dave & Shynut) And since we’re talking about characters, will one of them be of Runbow origins?”

Dave Proctor: “The fun thing about these characters is that they all have little differences in how they play. Shynut gets more points and Dave has an extra heart. I like to tell everyone in the office he was named after me. Because he’s lovely. As for a Runbow character, I think our fans are pretty excited about what’s coming…”

Miketendo64: “So very involved then, something I’m sure will delight your fans to know.”

Miketendo64: “With you publishing Pirate Pop Plus, is there any chance that we could see Pete Jr. or even the Bubble Pirate make a cameo in Runbow Deluxe/Pocket Deluxe as part of a new dlc?”

Dave Proctor: “Runbow as we know it is DLC-complete, so we won’t be seeing any more downloadable characters being added after Shantae. But we love the idea of cross-integration in characters in the 13AM family and are definitely thinking about it for future Shipping Solutions titles.”

Miketendo64: “Pirate Pop Plus was playable at both Gamescom 2016 and PAX West. How did you find gamers reaction to the title at either event and did any of you play the demo for yourself?”

Dave Proctor: “People seemed to really love it. I know the PAX team came back and said it got a ton of excited reactions from fans, which is exactly what we were hoping for. At Gamescom I had a great time showing it off to different interviewers and fans from all over Europe. Of course we had to play the demo, but we were sneaky enough to put the actual full build on the New 3DS playables at both events, and encouraged fans to spend coins on customizations and try to get their names on the leaderboards. Two of our demonstrators in Gamescom, Lucas and Jonas, both dominated the high scores on the two interactives there. Seriously the leaderboard on either console was their name four or five times (LUC and JON). They got really good at it.”

Miketendo64: “Practice makes perfect, but it’s good to hear that this is a game that your fans and even your none/but soon to be fans can sink their teeth into.”

From Developer to Publisher:

Miketendo64: “From developing and publishing your own game, to publishing someone else’s, how have you found the process? An easy adjustment, a learning curve, or something else entirely?”

Dave Proctor: “Part of the reason that we wanted to start 13AM Shipping Solutions is that we have such a big team and that we learned so much in our first couple of years becoming a studio. We wanted to use what we learned about the business side—how to submit builds, handle marketing materials, and how to organize release dates—and bring it to a new studio with a game we found fun. THAT part was going to be easy. Of course there are things we didn’t anticipate, like juggling multiple projects and communicating with a developer who is literally on the other side of the world… there were definitely some challenges, but it makes it feel like the same kind of work because we really believe in Pirate Pop Plus, as much as we did with Runbow.”

Like I said before, this is my second time talking to the guys of 13AM and if I had to use describe them in one word, that word would have to be Runbow, for they are bright, cheerful, fun, humorous and they’re off to a great start. Thank you Dave for taking the time to let me and our readers, learn a little bit more about what does look like a brilliant, addictive game. Pirate Pop Plus is going to be great and the release date reveal is coming, so get hyped because it means we’ll be seeing a release as well soon enough and that is exciting. But I’m waffling on, so I’m going to zip and pass the baton back to Dave, as he has a little message for all 13AM fans:

“All we want to say is thank you, thank you for your energy and enthusiasm, and thanks for getting excited about our first publishing effort. We know you guys will have fun with the game, and we can’t wait to hear what you think!”