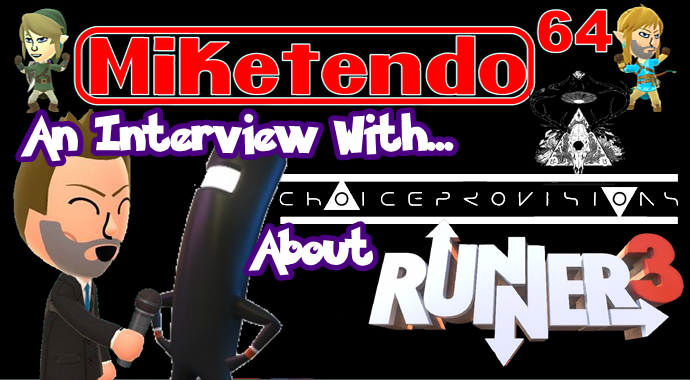 An Interview With… Choice Provisions (Runner3, So it Begins)

Something incredible happened this month, Choice Provisions announced a new Runner game and they confirmed Charles Martinet will be returning! Heads spun, gamers rejoiced and I was sat there in my seat thinking: “This is awesome news! But I can think of one thing that’ll be even better; talking to Choice Provisions about the new Runner3.”

So naturally I reached out and Dant Rumbo, the Producer of Runner was more than happy to oblige me, so strap yourselves in because it’s interview time! Sure this one is shorter than our usual interviews, but the content is as good as ever:

Miketendo64: “You have just announced Runner3, the third instalment to your Bit.Trip Runner games, how have you found the reaction to your announcement?”

Dant Rambo: “It’s a bit of a cliché to say, but the reaction has been overwhelming. The game industry has changed quite a bit since CommanderVideo’s last adventure, and there was just no way for us to tell what the reaction was going to be to this announcement.

People seem to be really excited about it, though, which has motivated us even more to make it the best game we possibly can.”

Miketendo64: “Now you haven’t announced any platforms yet and we’re not going to ask you now, but is there a possibility of Runner3 releasing on the Nintendo NX?”

Dant Rambo: “Sure! Anything is possible.”

Choice Provisions Would Love to Cameo CommanderVideo in a Runbow sequel:

Nintendino: “I can’t get enough of CommanderVideo, loved him in Runbow. Does he have any more guest appearances lined up and if so, what games are they?”

Dant Rambo: “Although we don’t have any guest appearances lined up at the moment, it’s something we’re always open to doing if it feels like a good fit. So while we may not have any cameos currently planned, I wouldn’t be surprised if that changed!

Tell 13AM Games to make another Runbow so that we can put CommanderVideo in it.”

The Difference Between Runner2 and Runner3 Will be HUGE!:

Miketendo64: “Over on your devlog, in one of your posts you mention Runner3 will have new features that will melt our Melchkins. Can you give us an example?”

Dant Rambo: “We’re not quite prepared to share anything just yet, but I will say this: We hope for the leap between Runner2 and Runner3 to feel as big as it was between BIT.TRIP RUNNER and Runner2. We want this game to deserve the title of “Runner3.” That said, we know what people enjoy about the Runner series and we have no intention of trying to change that.

No Story Spoilers (N0t yet anyway):

Dant Rambo: “We’re not prepared to discuss any story stuff yet but stay tuned!”

Mike Scorpio: “You must be thrilled to have Charles Martinet, the voice of Mario, joining you again for Runner3, what was it like working with him on Runner2?”

Dant Rambo: “It was an absolute blast! As you may have noticed, the writing of Runner2 is extremely silly and rife with alliteration. It’s not an easy script for any voice actor to pull off, but we knew Charles would nail it. And he did!

It also helps that he’s an unbelievably nice human being.”

Miketendo64: “Now the Runner games are essentially a series of side-scrolling platformers, where the player has to safely see the protagonist make it to the other side of the level, via avoiding obstacles and the like. You even have Charles Martinet involved, so would it be fair to say that Runner2 is Super Mario Run before there was a Super Mario Run?”

Dant Rambo: “Ha! I would say that is a fair thing to say. Then again, with the RUNNER games being platformers, we owe pretty much everything to Mario.”

Miketendo64: “How modest of you. True, but still modest.”

Miketendo64: “Well not to take any more of your time than we already have, despite initially emerging in 2004, Gaijin Games, now known as Choice Provisions, was founded in 2007. How do you intend to celebrate your 10th year anniversary next year?”

Dant Rambo: “By eating a whole lot of rum cake, and by releasing Runner3 to the world.”

Miketendo64: “Well what better way is there to celebrate?”

Now we may have only scratched the surface but then again, Runner3 is a newly announced title so we’ll gladly take what we can got. It just means Choice Provisions have wet our taste buds and we’ll gladly eat up every bit of news we get between now and the release of the game in 2017. So thank you Dant, for giving us a moment of your time, best of luck with the new game and because I’ve said enough, it’s back to Dant for the final say:

“To our fans: We know it’s been a while since CommanderVideo’s last adventure, and it means a lot that you’ve stuck with us all this time. We promise it will be worth the wait!”