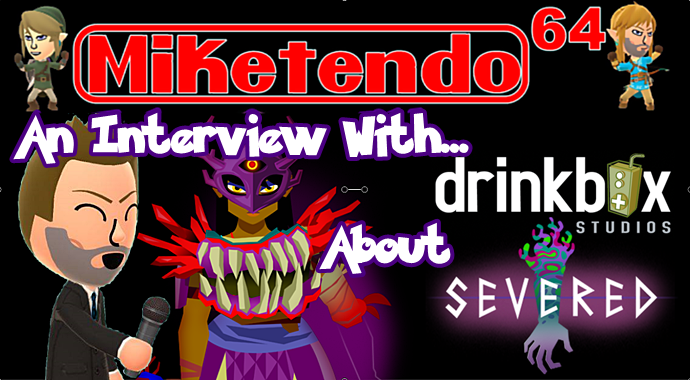 An Interview With… DrinkBox Studios (Severing Limbs with Sasha)

Ever hear of a game called Tales from Space: About a Blob? What about its sequel Mutant Blobs Attack and Guacamelee!? They are all great indie games developed by the Canadian firm Drinkbox Studios and in this month of September, their newest game makes its Nintendo debut!

Out in the eShop now is Severed, the hack and slash adventure that stars Sasha, a one-armed warrior who has to journey through a world of nightmares, in the hope of finding her family. With this game being what it is, it’s only natural to want to know more about it, so I spoke to the guys over at DrinkBox Studios and here’s everything Chris McQuinn had to say about Severed:

Miketendo64: “You were planning a 2015 release but the game was delayed. What caused the delay that forced you to release the game in 2016?”

Chris McQuinn: “A tale as old as time – game production going longer than expected! I think game design can take longer than expected when you approach a style that hasn’t been done by many other games before – and in the case of Severed this was touch based combat. As a result Severed required a lot of design experimentation.”

Miketendo64: “Severed certainly seems to have a voodoo-esque look to it. Was that a look you were going for or did it just sort of swing that way?”

Chris McQuinn: “The original aim for the style was to have a dreary gross nightmare world but to soften this atmosphere with a twist on how this was artistically represented by using bright colors. It is interesting to hear the different interpretations people from outside of the studio have on the style – it’s very cool.”

Miketendo64: “With Severed being playable on a number of different platforms, is it the same game on all platforms? Or are there some version differences?

Chris McQuinn: “When playing Severed I was surprised to find each device offered a unique physical experience because of the subtle differences in hardware controls. The overall content is the same across all versions although there are slight variations such as multiple difficulty modes or where the map is displayed.”

Miketendo64: “What inspired you to do a game like Severed and where does is inspiration come from?”

Chris McQuinn: “Severed was inspired from a place to create a game that was very different from our last, Guacamelee!. We needed a creative shift in gears so that our ideas were fresh. One of the motivations for Severed came from the challenge of attempting a design style that was really different from the standard platformer that we had just made.”

“Our target was to create a compelling touch based fighting game:”

Miketendo64: “When Severed was first announced, most associated it with being a mobile release, but this clearly wasn’t the case. Was releasing the game on mobile devices ever a possibility?”

Chris McQuinn: “In the case of Severed our target was to create a compelling touch based fighting game – and if a platform supported this experience to the high level we’re trying to achieve, then it was always a possibility.”

Making Severed for the Wii U & the 3DS:

Mike Scorpio: “What was the hardest challenge you’ve faced making Severed compatible for the Wii U GamePad and 3DS?”

Chris McQuinn: “I think the most difficult part for the Wii U was deciding what aspect of the game would be projected onto the TV display. We always knew the main game of Severed would display on the GamePad since touch was a prerequisite control, but would we show the map on the TV? Or a duplication of the GamePad? Who knows! Ok we know: the decision is left to the player. As for the 3DS it was important to attain a high level of graphics quality that properly represents DrinkBox. There was some optimization work that was required with the end result looking fantastic.”

HairyRhodes: “What made you decide touchscreen controls was the right fit for Severed?”

Chris McQuinn: “The original pitch for Severed involved a tactile gesture based combat system – so we never really had to make a conscious decision to have touchscreen controls or not.”

Yoshizz: “Having played the game on PS Vita, I love Severed and Sasha. Will we ever be seeing her in another game, even if it is as a cameo?”

Chris McQuinn: “If you know our previous games than you know we have a (bad) habit of referencing other games we love. So yes – I suspect there will most definitely be a call back to Sasha in another game world that we make. In fact, I guarantee it.”

Miketendo64: “Now that sounds like something to look forwards too!”

Miketendo64: “Sasha has quite a distinctive look about her. How many designs did you go through before agreed upon the version we know now?”

Chris McQuinn: “Everything at the studio is collaborative but most aspects start from a singular vision, be it a level design, game mechanic or art direction. As for Sasha her general look was proposed and pretty much agreed upon at first sight.”

Miketendo64: “Most games feature an upgrade system, nothing new there, except Severed sees Sasha upgrading her armour and skills by utilising the limbs she hacks off in battle. Who’s the madman/genius who came up with that idea and what was the general reaction when the team first heard it?”

Chris McQuinn: “It seems nobody can remember where the idea came from – often some of the best ideas just pop out during mini meetings at someone’s desk. What I can say is that using monster parts as currency for the upgrade system was instantly loved by the team.”

Miketendo64: “Last month, Severed was at Gamescom and had a fairly positive reaction from all those who played the demo. Being so European gamers can sometimes be a tricky and unforgiven lot, how relieved were you to learn European gamers approve?”

Chris McQuinn: “Haha – is that true? We did it! Honestly, we’re pretty thrilled when anyone beyond our immediate family approve of any of our games.”

Miketendo64: “Drinkbox Studios certainly have a knack for making colourful, intriguing games that are out the box. Is there any idea you don’t turn down?”

Chris McQuinn: “No! We enjoy every wacky idea possible. Making different games is enjoyable for us and also lets us stand out a little.”

Miketendo64: “And that is something fans certainly love about you guys!”

Miketendo64: “During the development phase, how much time would you say you spent playing Severed?”

Chris McQuinn: “A lot! Usually near the end of development you’re playing the game a few hours a day – but it depends on the position in the company. Those of us searching for bugs are putting in a lot more play time than people with specific tasks. I can’t speak for other people on the team but usually I’m looking forward to playing OTHER games once a project winds down.”

Miketendo64: “That is certainly an understandable reaction.”

Miketendo64: “Let’s do a little roleplay. You’re you and I’m someone who has never even heard about Severed and Guacamelee! How would you describe the two games to me to make me go out and play them?”

Chris McQuinn: “Wow, that’s quite a challenge. I’ll try to keep it succinct. Severed you play as a young warrior in a dreamscape, slashing monsters with touch based combat that is *actually* compelling. Whereas Guacamelee! is a hilarious “metroidvania” where your combat moves also serve as platforming moves.”

Behind the Scenes at DrinkBox:

Miketendo64: “Seeing as this is a question that hardly ever gets asked, just what exactly goes on behind the scenes over at DrinkBox Studios? Are you all well behaved and solely focused on the work, or is there time for office antics every now and then?”

Miketendo64: “Probably yeah, but you can’t be that old is you’re still making and playing videogames like the rest of us.”

Chris McQuinn: “We’ve been looking into this possibility. Unfortunately we’re quite busy over here almost all the time – you think with the release of Severed we would have more time – not so! But ya, we’d also love a physical release of a DrinkBox game, so stay tuned.”

Miketendo64: “We most certainly will.”

DrinkBox’s stance on the Competition:

Miketendo64: “With so many talented indie game developers in Canada, (13AM Games, Thunder Lotus Games to name two of them,) how do you view these other companies? Are they your competition, or someone you would like to work with one day?”

Chris McQuinn: “I think as you increase the number of smaller teams creating top tier games you also increase the total player base of people willing to give “indie” games a chance. This is good for everyone – including us.”

Confidence in your Team is Key!:

Miketendo64: “Founded in 2008, with the small staff you have, you have been able to produce 4 quality games in the short span of eight years. That is by no means a small task. You must have a lot of highs and lows during that time?”

Chris McQuinn: “True, we have. I think it’s pretty natural to have highs and lows. There are months when you think the game is fantastic, and then a few months later the game feel absolutely rudderless and terrible. The key is to have confidence in your team that you‘ll be able to bring all the loose threads together for a solid final product.”

Miketendo64: “So after Severed, what’s next for DrinkBox Studios? A sequel to Guacamelee!? Another Tales from Space Game? Or something else entirely?”

Chris McQuinn: “Currently we have a few projects being tried out to see how they feel. At the moment we’re not 100% which one we’ll be moving forward with but hopefully will have more to say closer to the end of the year.”

Thanks to Chris, we got to learn a little more about such an intriguing game and learn a little bit about the team behind the game, so a big thanks goes out to everyone at DrinkBox, especially David, Graham and Chris. And now to take us out, here’s Chris with the final say, a message to all DrinkBox fans:

“Thanks for the support as always – all the emails and face to face conversations we have with fans keeps us very motivated.”


Categorised in: an interview with, eShop, Interview, Wii U