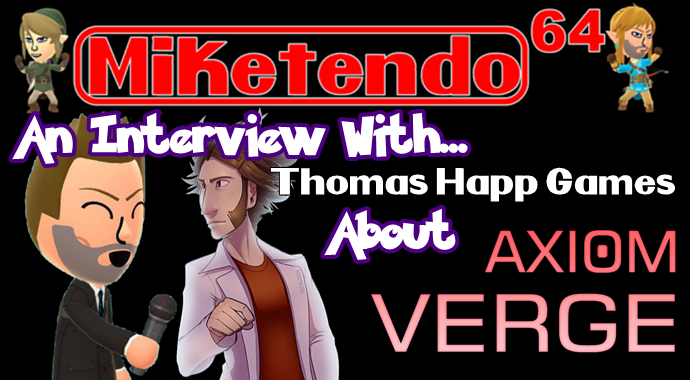 An Interview With… Thomas Happ Games (Before, During and Beyond)

One of the most eagerly awaited games released on the Wii U eShop this month, the very brilliant Axiom Verge! Everyone loves this game and there’s a ton of good reasons that explaining it, it’s a game we want, a game that we need and one we will remember, just like how we still remember the games way back when we were all a lot younger. But the problem with a game like Axiom Verge is that it’s too good and it leaves us with questions, so we at Miketendo64 thought it was time for another interview.

Thomas Happ, the man and name behind Thomas Happ Games has been doing the rounds this month, answering a lot of questions and he even answered ours, so you may as well strap yourselves in because from a 3DS port to an NX port and even game development, there’s a lot to go through:

Axiom Verge for the 3DS Still hasn’t been ruled out (Yet):

Miketendo64: “Last month, among the many things Dan spoke about with Nintendo World Report the difficulties of trying to make a game like Axiom playable on the 3DS popped up and that you guys are still looking into it. How is the investigation going or is it still too soon to ask?”

Tom Happ: “It’s still too soon to ask.  It’s a pretty tenuous situation, though; we’ve got a 3DS expert who is going to have to port enough of the game to get benchmarks on whether it can even run or be feasible, so this investigation itself is taking some time.”

Miketendo64: “Meaning still ongoing, so a 3DS version has not been ruled out just yet. Good to know.”

Tom Happ: “We only know the same rumors everyone else knows, that they’ll announce it sometime this fall. Hopefully we can get a dev kit and try and get a port going for it.”

Miketendo64: “Fingers crossed you do. It would certainly be a welcome addition.”

MetroidMania: “When developing Axiom, did you ever consider doing a multiplayer mode and is it something you would at least consider for a sequel?”

Tom Happ: “Multiplayer is almost like developing a whole additional game.  So when you see a single-player game start supporting multiplayer, you should always ask, what did the single-player game lose so that it could have this?  The closest I would possibly add to a sequel would be something like ghost runs for speedrun mode, where you could race other player’s ghosts, but not actually interact with them.”

DLC and a Retail Edition of Axiom Verge is a Possibility:

@BadJokes2000: “A retail edition probably isn’t on the cards but what about dlc? An extra campaign to keep us coming back, long after the adventure is over?”

Tom Happ: “There might be a retail edition still.  I have ideas for extra campaigns, but it still makes more sense to me to just build a sequel. A lot of other dev studios can dedicate some of the staff to working on DLC while the rest of the team starts on the new game. Since I’m a team of 1, any work I do on Axiom Verge will keep me from working on my next game.”

Axiom Verge’s Story is to Remain something of a Mystery (For Now):

Miketendo64: “There is a lot of conjecture around Axiom Verge as regards to story. The story goes that Trace successfully crossed the breach into another universe. Others speculate that it is actually all in Trace’s head and is all a dream. Another claims that it all takes place over multiple alternate plains? Can you help us and the readers make sense of it all and give us the true storyline? And maybe explain the endings as well?”

Tom Happ: “No.  I mean, if you think of a franchise like Star Wars, do you really want me to tell you who Luke’s father and sister are?”

Miketendo64: “Since the game’s release on the Wii U this month, have you had the chance to look at the feedback it’s gotten in the Miiverse’s Axiom Verge Community?”

Tom Happ: “Yes, I’ve popped in there a few times.  It’s interesting.  The Miiverse is totally different from Steam forums.  I like how some people use it to draw pictures that seem completely unrelated to Axiom Verge. Dan Adelman, my business partner, used to work at Nintendo, so he checks in on the Miiverse community all the time.”

From PlayStation 4 to Wii U:

Miketendo64: “Having already released on PS4 and Windows, just what difficulties did Axiom Verge go through for the game to be made compatible for the Wii and the integration of the Wii U’s GamePad?”

Tom Happ: “It had to be ported from C# to C++ since that wasn’t supported natively on Wii U.  We hired Blitworks to perform this conversion.  They also handled integration of the GamePad and all other Wii U features.”

Miketendo64: “In 2014, you were selected for Sony’s Pub Fund. This really changed things for you as it enabled you to begin full time development on the game and release Axiom on March 31st 2015. What was your reaction when you first learned you were selected?”

Tom Happ: “Kind of like disbelief.  Like winning the lottery.  It felt like I’d just entered some strange new world where impossible things can now happen.”

The Hardest Part of Working on Axiom Verge:

Miketendo64: “Since you began work on the game in 2010, you did all the art, the code, music, and even the game design yourself. What area of the game gave you the most difficulty when developing it and what part did you enjoy the most?”

Tom Happ: “The most difficult thing was just basic collision physics on irregular non-block terrain.  I went through a few different iterations, the most complicated of which tried to build a mesh by looking at pixel data.  I don’t recommend anyone try this if you can avoid it.  The most enjoyable part is the music, because you can more or less just sit down and write it without having to stop and worry whether it’s going to work with all the other parts of the game.”

Miketendo64: “Hand-holding is something we see far too often in most games these days, but in Axiom Verge there is none. Was this something you intended to do, or just something that happened along the way?”

Tom Happ: “The enjoyment of games, whether people want to admit it or not, is largely based on teaching and learning.  If you need hand-holding it’s often a sign that your game isn’t teaching players well with its own mechanics.”

Wii U Does it Best (In Most Cases):

Miketendo64: “Being so Axiom Verge is available on a number of formats, for the gamer with multiple consoles, which console/format provides the best experience for playing the game?”

Tom Happ: “In most cases I think Wii U, since it has the secondary map screen and is the only console version with leaderboards.  However if you are into achievements and trophies, the Wii U is the only version that doesn’t have those. The core game is the same on all of the platforms, so it really comes down to which platform features are most appealing to you.”

A little More about the Samus Cameo that Didn’t Happen:

Miketendo64: “Had Nintendo approached you about including Samus Aran as an unlockable character for the game upon 100% completion, would you have jumped at the chance or kept the game as it is?”

Tom Happ: “Well we actually proposed this kind of thing, but Nintendo decided that Samus – even just a visual resembling her suit – is too important an IP.  I can sort of understand this since lately they have been expanding as a 3rd party and locking down their IP will help that strategy.”

Miketendo64: “There’s no denying Axiom Verge draws a lot of inspiration from Metroid and Castlevania. What made you choose this particular type of gameplay for Axiom Verge?”

Tom Happ: “It’s what I grew up with.  I was trying to make the ultimate game by combining all my childhood favorites. But there are also a ton of other influences in there as well. Games like Bionic Commando, Rygar, Shatterhand, Contra, Ninja Gaiden… the list goes on!”

Miketendo64: “Since Axiom Verge is viewed as being a Spiritual Successor to Metroid, do you see yourself creating a game centred around Ghouls and Vampires like Castlevania?”

Tom Happ: “No, I think Iga himself has that handled better than I could!”

Miketendo64: “I ask everyone this, during the development phase, how much time would you say you spent playing Axiom Verge and are you still playing it now?

Tom Happ: “Maybe 8 hours a week?  You have to constantly boot it up just to see if what you made works.  The only reason I play it now is to fix bugs or if I’m at a trade show.”

Miketendo64: “Earlier this month you attended PAX West, how did you find the event and what was your favourite/worst moment from it?”

Tom Happ: “I enjoyed it a lot, though I had a cold and had to leave early.  My favorite part was the Nindies@Night event Nintendo hosted at the EMP museum.  It felt amazing to be one of the stars of the show.”

Thomas Happ Games will Not be Attending Barcelona Games World (This Year):

Miketendo64: “Seeing as you’re no stranger to attending gaming events, such as PAX West 2016. Will you be attending any other events this year such as the Barcelona Games World in Spain?

Tom Happ: “I’m not sure yet. Now that Axiom Verge is out on pretty much all of the platforms, it’s hard to justify making those big trips. Barcelona Games World in particular is coming up pretty soon, so it’s probably a bit late to be adding that to my list. Now if someone were to invite me next year…”

Miketendo64: “If you could give one piece of advice to aspiring indie game developers, what would it be?”

Tom Happ: “I’d say don’t quit your day job; instead use it to gain experience.  If you cut out time wasted watching TV, you’ll free up a lot of time for development.”

Miketendo64: “Isn’t that the truth? It really does make a great deal of a difference.”

Tom Happ: “I can’t say or Dan Adelman will kill me.”

Miketendo64: “Well we wouldn’t want that now would we? Especially if it means no Axiom Verge 2.”

As with every interview we do, we always come away with knowing more about the game we’re asking about and those behind it. To Dan and Tom, thank you both for the role you played with this interview and thank you Tom for delivering us the Metroid game we’ve been begging for. Now that’s enough from me, so it’s back to Tom for the final say:

“Thanks everyone for helping to support me and my family by purchasing Axiom Verge.”


Categorised in: an interview with, eShop, Interview, Wii U