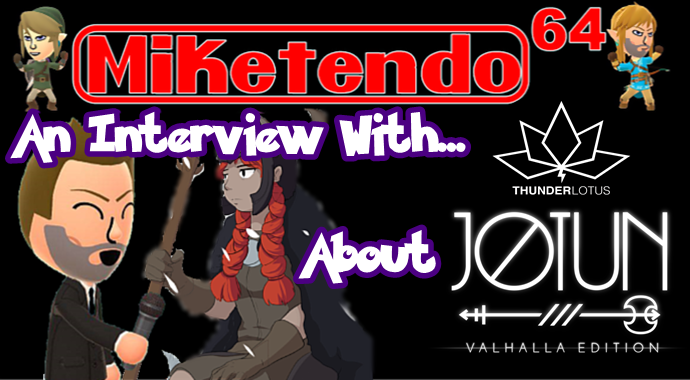 Back when I was younger than I am now and a diligent student, history was one of my better classes, especially when the subject in question where the Greeks, the Romans and the Vikings, so when you get a game that has some The Legend of Zelda styled gameplay and draws heavily on Norse Mythology, you can pretty much bet I will get excited about it. So excited in fact that I actually did check out the game on Steam, but put off completing it, because I’ve been holding out for the Wii U console release (which we now know will be the 8th of September.) But having checked it out for myself, and following the game closely, this month I decided I wanted to talk to the man behind the game.

So who is the man behind the game? Well that would be Will Dubé, who in January 2014, quit his job and with the help of a few friends, launched Jotun as a Kickstarter campaign in July 2014. With 2,999 backers, over $64,000 dollars was made and Jotun got the greenlight. So yeah, Will’s the guy who got the ball rolling and with help, got a game like Jotun on Steam and last week, with thanks to one Rodrigue Duperron, the Marketing and Communications Specialist for Thunder Lotus Games, I had the chance to interview Will regarding Jotun. So if you fancy seeing what came up and what got answered, including answers to some fan questions, you’re going to want to scroll down:

Why Vikings? Why not?:

Miketendo64: “Jotun’s story revolves around one of Norse mythology, what made Thunder Lotus Games choose such a thing? An interest in the subject already or just a desire to do something different?”

Will Dubé: “First of all, Vikings are badass! I love the culture. The stories are crazy like this one about cows with poisonous udders and there really is a lot more to Viking mythology than most of us know and to me that make it super interesting.”

Miketendo64: “I remember learning that in school. Put me off my milk for a week. Ah, good times!”

Valhalla Edition is for Everyone!:

Will Dubé: “A free update of Valhalla Edition will be headed to Steam and will go out around the same time Jotun releases on console versions.”

How Thora Came to Be:

Will Dubé: “The idea behind doing Thora as a female was actually the art director’s. We wanted a believable character, a warrior who made sense, yet could wield a giant axe, is strong with big muscles. It’s not easy impressing the Gods and going up against the Jotun, so the character also needed to powerful as well, but then when we saw the initial design, we were like, ‘yup, that’s our hero!’”

Miketendo64: “We’ve already seen what Thora can do in the afterlife in the hopes of making it into Valhalla, but has there been any discussion about a game that takes place prior to her death? Or to put it more basically, have you thoughts and are there any plans about doing a prequel, which would actually end with the death, allowing Jotun to be a direct continuation?”

Will Dubé: “That’s actually a great idea. Not actually considered it, but it would be pretty cool.”

Miketendo64: “By all means you’re welcome to have it.”

iLikeUnicorns: “Prior to the scripting of the story for Jotun, how much time was spent researching all you needed to know about Norse mythology to make this game work?”

Will Dubé: “Well we were pretty much researching throughout the whole duration of the development of the game, because we also wanted this to be a game that appeals to hard-core Norse mythology fans as well.”

Miketendo64: “The game uses a hand drawn frame-by-frame art style, what made you decide to go down that route compared to the many other styles you could have chosen?”

Will Dubé: “Honestly and this is probably a lame answer, but the reason why we went with hand drawn frame by frame art is pretty much because of the artists I knew. But at the same time, it is so rare to find art such of this in games, with that classic Disney look and style, so I thought it would be cool to use such a cool and underused style.”

Miketendo64: “No, not lame at all, but since we’re on the subject of hand-drawn, how many hand drawn sketches make up all the cut-scenes of the game?

Will Dubé: “We actually went over this and we estimated we did around 15,000 drawings. It was a lot.”

Will Dubé: “Oh absolutely. Those games are great and the boss battles are always so epic, so we really wanted to try and capture that feeling as best as we could for Jotun. So yes, it did inspire a number of our boss battles.”

Miketendo64: “DLC continues to become more and more popular. Is there any desire to implement any additional content for Jotun, or are you happy with how the game is now and there’s no need for any dlc?”

Will Dubé: “We’d love to come back to Jotun in the future but Valhalla is pretty much our final touch and our way of coming through with our New Game Plus promise on Kickstarter, as Valhalla mode is essentially a New Game Plus in its own right. So although we could do more and we’re not saying we will, we view Valhalla mode as a fitting conclusion to the game, a nice way to finish it off, so for now at least, Valhalla Edition is the final version of the game.”

Miketendo64: “With so many smaller indie companies in the field now, how are you finding the video game industry and do you have any advice you would like to pass on to any aspiring video game developers?”

Will Dubé: “Yeah, there are is ton of competition now, so it’s certainly a crowded market. So for anyone looking to join the table, if you want to get noticed, you will need to have a standout game, packed with different and unusual ideas.”

Miketendo64: “Jotun, Shovel Knight and Runbow all initially released in 2015, so as far as other indie games go, are there any games out there right now that you are impressed with?”

Will Dubé: “Well we play all the games that come out to get an idea of what’s going on, and right now we’re following No Man’s Sky. But by playing a wide range of games we get a good feel for what works, what doesn’t and what appeals to the market right now and we also get to play games like Journey, Diablo 2 and Nuclear Throne, which is a lot of fun!”

“We’re actually Working on a couple of Unannounced games at the Moment”:

Miketendo64: “After the release of Jotun: Valhalla Edition, what’s next for next for Thunder Lotus Games? A break or is there already project in mind?”

Will Dubé: “There is actually, so there will be no kicking back and relaxing, as we are working on a couple unannounced games at the moment. So although I can’t say much about them now, what I can say is this is definitely not the last you’ve heard from us.”

Talking to Will, we got to learn a little more about a game we love and can not wait for when it comes to the Wii U next month and since Thunder Lotus Games first game is intriguing title with a rich story, we can expect to see more good things from them in the future. So thank you Will for your time and thank you Rodrigue, you guys are great and we wish you the best of luck with your future endeavours and now to take us out, here’s Will with the final say:

“To our fans, you guys are incredible and thank you so much. We make games so people can enjoy them and we have had a lot of great feedback, so again thank you. And don’t forget Jotun is coming to console, so for those who you haven’t played Jotun yet, it’s never too late to impress the Gods and take on the Jotun! We hope you love the game and look forwards to what we come out with next.”


Categorised in: an interview with, Interview, Wii U