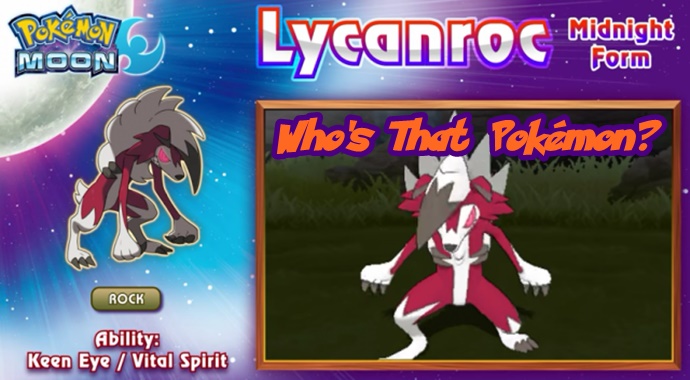 Welcome back to Who’s That Pokémon? the feature series regarding the Pokémon we can expect to see in the upcoming games. From Rowlet to Tapu Koko, and Drampa to Type:Null, we have covered them all, but now we have another “four” Pokémon, so get ready for another instalment of Who’s That Pokémon? We dedicate this edition to the Rockruff evolution Pokémon Moon exclusive, Midnight Form Lycanroc!

Description: “When Rockruff is bathed in an abundance of lunar energy, it evolves into its Midnight Form. In the world of Pokémon Moon, Lunala’s influence causes Rockruff to evolve into this form.

Midnight Form Lycanroc provokes its opponents by pressing in hard and inviting their attack. When an opponent falls for this tactic and attacks, Lycanroc counters with its forte: a single devastating blow that finishes off its foe! The stronger its opponent is, the more excited for battle Lycanroc becomes. It doesn’t mind getting hurt if it means victory in battle. Battles thrill it so much that its eyes glow.

Contempt rises in this Pokémon for Trainers who give orders it doesn’t agree with or who try to force it to battle. On the other hand, it will feel a deep trust in a Trainer who can truly draw forth its power in battle.

Counter is a move that Rockruff can learn when it evolves into Midnight Form Lycanroc. When Lycanroc takes physical damage from an opponent, it deals double that damage back to the same opponent.”