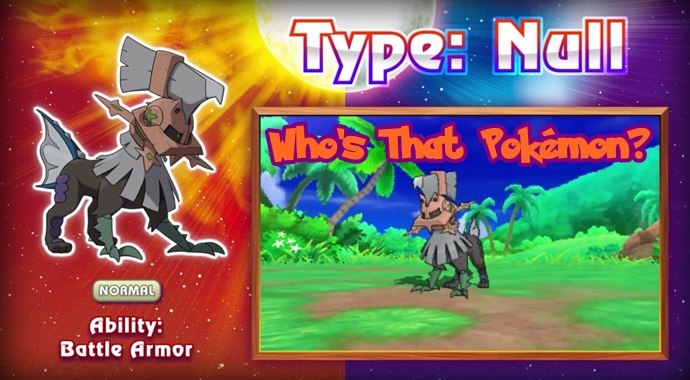 September 8, 2016 9:57 am Published by Jack Longman Leave your thoughts

Welcome back to “Who’s That Pokémon?” the feature series regarding the Pokémon we can expect to see in the upcoming games. From Rowlet to Tapu Koko, and Drampa to Stufful, we have covered them all, but now that more Pokémon have been revealed this month, its time they got their own instalment of Who’s That Pokémon? So join us as we do a post all about the final Pokémon revealed from the new batch, Type: Null!

Description: “This Pokémon wearing a mask has been dubbed “Null,” meaning nothing.

The shapes of its front and hind legs are clearly different. The reason is that Type: Null was constructed to synthesize the strengths of various Pokémon, enabling it to adapt to any situation.

The mask fitted to Type: Null’s head is a piece of equipment designed to control its latent powers. It’s extremely heavy, so it also serves to hinder Type: Null’s agility.

To complete a certain mission, there was need of a Pokémon powerful enough to rival those Pokémon often spoken of in mythology.”