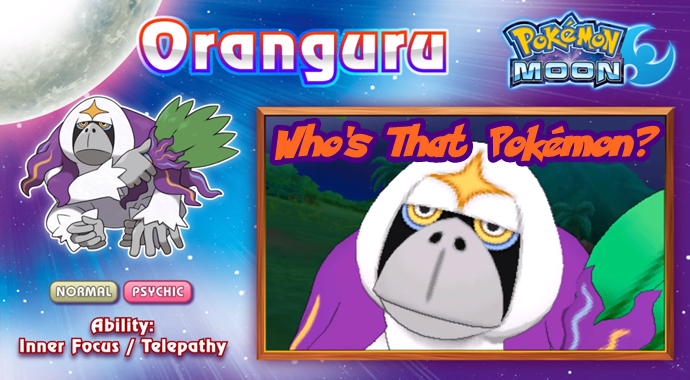 Welcome back to Who’s That Pokémon? the feature series regarding the Pokémon we can expect to see in the upcoming games. From Rowlet to Tapu Koko, and Drampa to Type:Null, we have covered them all, but now we have another “four” Pokémon, so get ready for another instalment of Who’s That Pokémon? We dedicate this edition to the Pokémon Moon exclusive, Oranguru!

Oranguru live solitary lives deep in the forests and do not usually take much action. Instead, they position themselves high up in the trees to meditate. Long ago, people thought that Oranguru were humans who dwelled in the forest depths, so they called them “the people of the forests.” Oranguru is kind to the other Pokémon living in the forest, providing medicine for injured Pokémon and food for the hungry.

Oranguru sometimes act on their own initiative and will use items that only humans normally use. From a Trainer’s perspective, they can be hard Pokémon to handle at times. Allegedly, there have been sightings of Oranguru using Poké Balls!

The fan-like objects held by Oranguru are handmade by the Oranguru themselves. These fans appear to be made of layers of leaves bound together with Oranguru’s own fur.

Instruct is a move that only Oranguru can learn. It can make the selected target use its most recent move again immediately.”