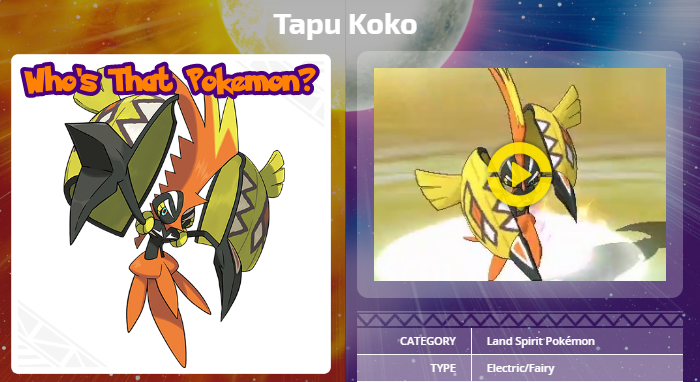 For every day that passes, is another day we move closer to the release of Sun and Moon and the closer we get, the more Pokémon we get to learn about. This is “Who’s That Pokémon?” A series of posts regarding the Pokémon we can expect to see in the upcoming games. From Rowlet to Magearna, we’ve covered them all, but now with the latest batch revealed, it’s time for some more additions of Who’s That Pokémon? and in this particular post, it’s all about Tapu Koko!

Description: “Tapu Koko is a special Pokémon that protects the area where it lives. It’s called the guardian deity of Melemele Island, one of the islands of the Alola region. Although it’s known as a guardian deity, it’s a surprisingly fickle Pokémon, and will not necessarily come to your aid if you need help.

Despite that, this Pokémon has a strong sense of curiosity. If it becomes interested in a person or in other Pokémon, it may come to play or battle with them.

Tapu Koko’s Ability is Electric Surge, an Ability never before seen in a Pokémon. Electric Surge fills the field around the Pokémon’s feet with electricity when it appears, raising the power of any Electric-type moves for Pokémon on the ground and preventing any Pokémon from falling asleep. Tapu Koko can learn a new move called Nature’s Madness, which slams into an opponent and reduces that Pokémon’s HP by half!”

“Tapu Koko can store up electricity by enclosing itself in the shells on its arms. And it also appears to enter this form during other, special times…”