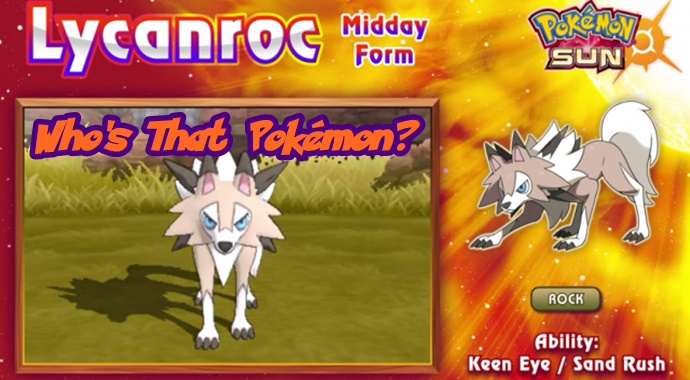 Welcome back to Who’s That Pokémon? the feature series regarding the Pokémon we can expect to see in the upcoming games. From Rowlet to Tapu Koko, and Drampa to Type:Null, we have covered them all, but now we have another “four” Pokémon, so get ready for another instalment of Who’s That Pokémon? We dedicate this edition to the Rockruff evolution Pokémon Sun exclusive, Midday Form Lycanroc!

Description: “When Rockruff is bathed in profuse amounts of solar energy, it evolves into its Midday Form. In the world of Pokémon Sun, Solgaleo’s influence causes Rockruff to evolve into this form.

Lycanroc lives solo in mountains and deserts, not creating a pack. Each has its own territory, and they live without interfering with one another, which helps to avoid unnecessary fights.

Lycanroc obeys its Trainer’s orders dutifully. In particular, if a Trainer accepted it during its more rebellious pre-Evolution period, Lycanroc will never ever betray that Trainer and will be the most loyal of partners.

The Midday Form Lycanroc is known for speedy movements that leave its opponents bewildered. It dodges opponents’ strikes while attacking with the sharp rocks of its mane as it slips right past them.

Accelerock is a move that only Midday Form Lycanroc can learn. It slams into an opponent with quick moves. This move is guaranteed to strike first!”