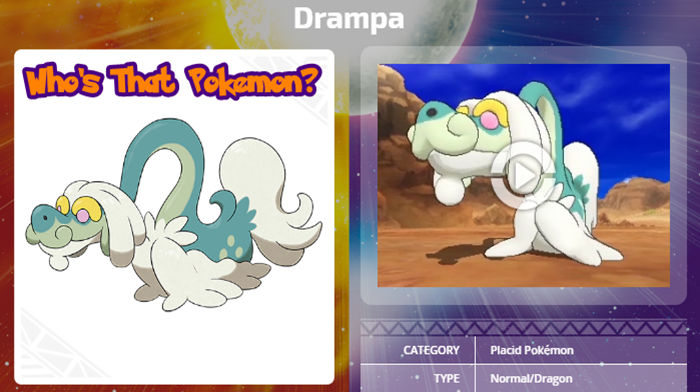 For every day that passes, is another day we move closer to the release of Sun and Moon and the closer we get, the more Pokémon we get to learn about. This is “Who’s That Pokémon?” A series of posts regarding the Pokémon we can expect to see in the upcoming games. From Rowlet to Magearna, we’ve covered them all, but now with the latest batch revealed, it’s time for some more additions of Who’s That Pokémon? and in this particular post, it’s all about Drampa!

Description: “Drampa are dragons that live alone in the mountains 10,000 feet above sea level. Since they can’t obtain the Berries they feed on at that range, they descend to the base of the mountains at dawn every day. Drampa love communicating with people and Pokémon.

Drampa are especially gentle with children and often appear at schools and parks where children gather.

While Drampa is usually a very gentle Pokémon, it can fly into a rage if a child it cares for is hurt in some way. The Dragon Breath move that it fires off at such times is powerful enough to blow down buildings!