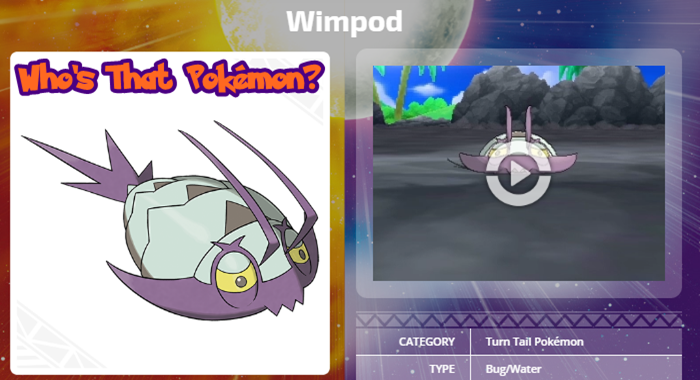 Welcome back to “Who’s That Pokémon?” the feature series regarding the Pokémon we can expect to see in the upcoming games. From Rowlet to Magearna, and Tapu Koko to Salandit, we have covered them all, but now that 6 new Pokémon were just recently revealed, it’s time for some more additions of Who’s That Pokémon? and in this particular post, it’s all about Wimpod!

Description: “Wimpod have a cowardly nature and are wary of noises and sudden movements. If you approach them in a group, they’ll immediately run off. When Wimpod feel threatened, they spit out a poisonous liquid. The stench of this toxic fluid signals others that danger is near. Despite their extreme cowardice, their curiosity leads Wimpod to approach people or Pokémon that are standing still.

Wimpod eat and store anything that they find fallen on the ground. They also scavenge any garbage that’s been dropped in the sea, so they’re highly valued as cleaners. They sometimes carry pearls or other valuable items, so humans or Pokémon like Murkrow may target them.