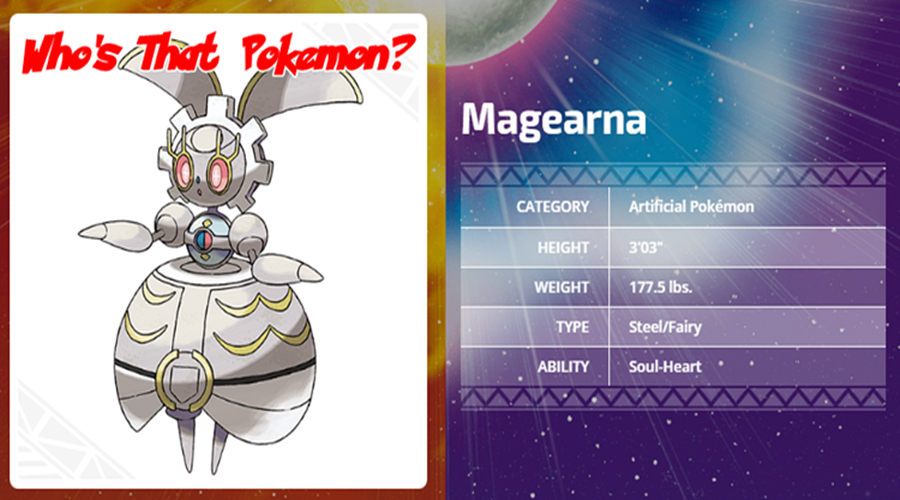 While we still wait on more details concerning Iwanko & Nekkoala, E3 is here and we’ve just had three new Pokémon revealed and more details on Magearna, so it’s time for the final of our 4 new “Who’s That Pokémon?” posts. With the rest done, this instalment can only be about one of two titled Pokémon from the upcoming movie, it’s Magearna!

Description: “Magearna is a Mythical Pokémon that was created by a scientist of uncommon genius 500 years ago. Magearna has the power to perceive the emotions, thoughts, and feelings of other Pokémon. If a Pokémon is injured, Magearna will feel the other’s pain and suffering and will try as hard as it can to save that Pokémon. Magearna’s real body is the spherical construction in its chest called the Soul-Heart, created by a scientist who gathered the life energy from Pokémon. Magearna has the ability to transform itself into the appearance of a Poké Ball! It does so when it sleeps, and apparently also when it’s sad. Magearna’s Ability is the Soul-Heart Ability, a new Ability that no previous Pokémon has had. Soul-Heart has the effect of raising Magearna’s Sp. Atk by 1 each time another Pokémon in the area faints. This is a new Ability—one that can be put to good use in battle.

As soon as any additional information is divulged on all the new Pokémon we covered in our Who’s That Pokémon?” posts, or even on Iwanko and Nekkoala, we will be back and ready to post all about them.