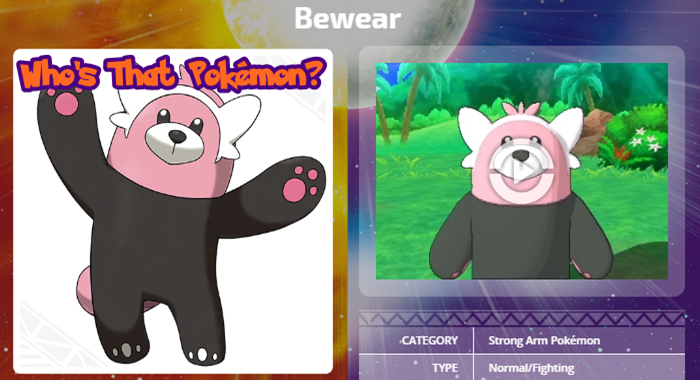 Welcome back to “Who’s That Pokémon?” the feature series regarding the Pokémon we can expect to see in the upcoming games. From Rowlet to Magearna, and Tapu Koko to Salandit, we have covered them all, but now that 6 new Pokémon were just recently revealed, it’s time for some more additions of Who’s That Pokémon? and in this particular post, it’s all about Bewear!

Description: “When Bewear is acting in a friendly fashion, just swinging its arms around, you must never dare to approach it carelessly. It is acknowledged to be a dangerous Pokémon, even within the Alola region. You may see warning signs posted near places it resides.

When Bewear grows fond of its Trainer, it may show that feeling in a fond embrace—but the force of that hug is tremendous! Trainers must teach these Pokémon how to restrain their strength when showing affection.

“Some wild Bewear use amazing martial-arts moves. Apparently the Pokémon learn these moves by watching Black Belts practicing when they go out to train in the woods.

Bewear’s arms and legs are strong and highly developed. Its powerful spine enables it to lift objects weighing a ton or more. It loves to give crushing bear hugs—a tight hug from this Pokémon’s arms will split anything at all in two!”