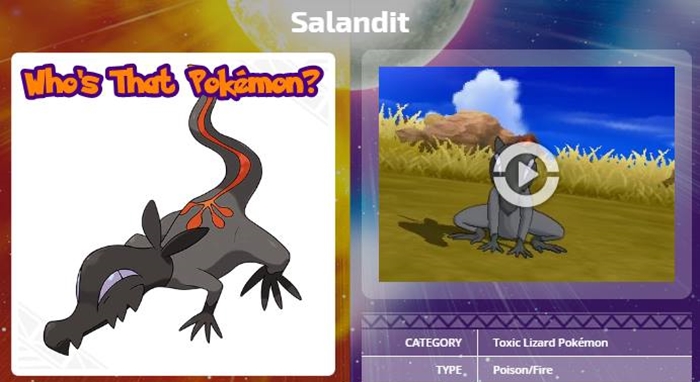 Welcome back to “Who’s That Pokémon?” the feature series regarding the Pokémon we can expect to see in the upcoming games. From Rowlet to Magearna, and Tapu Koko to Cutiefly, we have covered them all, but now that Masuda couldn’t help himself but reveal another Pokémon at the Japan Expo in Paris, it’s time for another addition of Who’s That Pokémon? and in this particular post, it’s all about Salandit!

Description: “Salandit emits toxic gas, together with flames, from the base of its tail. This poisonous gas has a sweet smell, and anyone who unknowingly breathes it in will become dizzy. Salandit is not a very powerful Pokémon, but its cunning nature allows it to battle fiercely by throwing its opponents off balance.

Salandit females not only release toxic gases, they can also emit pheromones that attract males of all species, including Pokémon and humans. Inhaling these pheromones may cause opponents to be controlled by Salandit’s will.