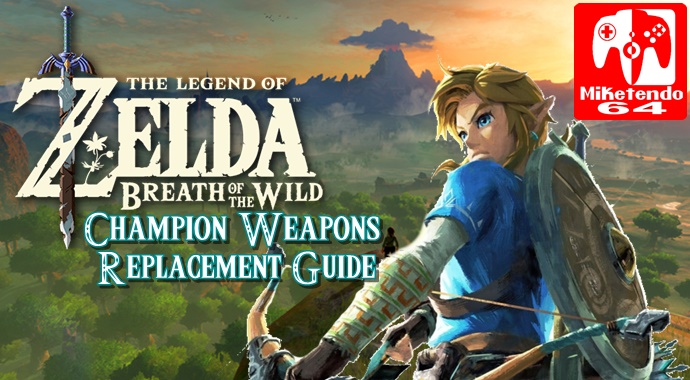 Most of you that have been playing Zelda: Breath Of The Wild, be it on the Nintendo Switch or Wii U, you will no doubt have come to a point in the game where you have used one of the Champion’s weapons and have it break on you. Though they are awarded to you after recapturing the Divine Beast by the chief of the people that the said Divine Beast is to supposedly protect, these weapons are much stronger and durable but not unbreakable and will eventually have to be discarded.

All is not lost however, as there are masons of sorts in each of the four hometowns of the Champions that can replace the Champion weapon associated with their champion. The Zora mason can replace Mipha’s Trident, the Goron mason can replace the Daruk’s Sword, The Rito mason can replace Revali’s Bow and Buliara can replace Urbossa’s Scimitar and Shield. To replace each item comes at a cost which requires certain materials to forge them. Most being a weaker version of the weapon, a diamond and 5 pieces of flint or wood. Check out the slideshow below which shows you which characters you will need to talk to in order to recreate the appropriate Champion’s Weapon.

You can only replace the champion weapons if you have already owned them. The masons won’t forge you replacement weapons until you have beaten the Divine Beast that threatens their land and possessed the original Champion’s weapon which is awarded to you by the Chief of their Race.


Categorised in: Breath of the Wild, Guide, Nintendo, Nintendo Switch, The Legend Of Zelda, Wii U