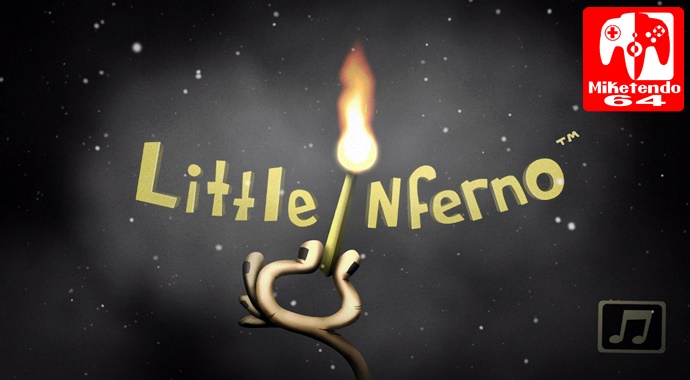 [Review] Burning Down the House with Little Inferno

Initially released as a launch title on the Wii U back in 2012 and developed by Tomorrow Corporation, Little Inferno is one of three Tomorrow Corporation titles to be given the Switch release treatment and even with a few differences, it is still the game pyromaniacs know and love. But first things first, since not everyone would have played the title, just what kind of a game is it?

Well on Switch, Little Inferno is a game that can be played in Handheld and Tabletop mode that takes advantage of the Nintendo Switch’s screen, but also allows a single player to use the right Joy-Con controller like a laser pointer, (or even a Wii remote.) Only Little Inferno will not remain as a single player burn it all experience, as a local multiplayer experience is on its way, since Little Inferno for Switch, is meant to be a game where 2 players can play together should they wish it, but this wasn’t the case. Instead multiplayer will now come to the game as a free update, which is expected sometime this March.

Asides from local multiplayer, the other new addition that the Switch version possesses is it now features the full Original Soundtrack and if you’ve ever played Little Inferno before, then you’ll know the music can be a bit dark and delightful and rather upbeat at times, but always intriguing. Although thinking about it, that description could also be used to describe the game itself. Little Inferno is a dark and delightful game that lets you burn anything. Granted you need to earn money called Tomorrow Bucks to buy things to burn, but burning things gives you money, so the game then puts the player in this loop of burning and buying until they have tried out every single combo there is (99 in all), as they burn every single available item from the 7 catalogues this game features. But because some items take longer to come though than others, you can always use your Tomorrow Stamps (able to hold up to 99 in all and 999 Tomorrow Bucks in total). Then just as soon as the item is ready to be burned, then light it up and the cycle continues.

But there’s more to it than just that just in case you don’t have enough items to burn, or just want to burn something different, there’s this seemingly sweet Sugar Plumps character (who goes on to become very disturbing,) who constantly sends you letters, (Nancy, head of the Tomorrow Corporation and the Weatherman also sends you letters) as well as things for you to burn and requests items from you so that she can burn them on her own Tomorrow Corporation Furnace and then just when you think you’ve seen it all and burned everything there is to burn, the game takes a huge dark turn.

Little Inferno is not just a game purely about burning things in your own home in the city of Burnington, which is constantly seeing snowfall and freezing cold as there is a side-scrolling side to this game. One that will have players able to see the full graphical glory of Burnington as they can now make their character walk round town, talk to all those he sees including the postman and I would say more, but even though this is an old game that’s newly released on Switch, not everyone has played it. So although I could, there are not going to be any spoilers here, but just though there is more to meets the eye with this burn it all down and the soundtrack does a perfect job of capturing the true essence of not just the scenes, but the overall game itself and while this review may be somewhat short in length, it’s time for the conclusion.

When Little Inferno begins, it is nothing more than a rather simple game with a seemingly boring theme, because let’s face it even burning things can get dull if you do it for hours on end, but then just when you think you know what kind of a game you are playing, the world is ripped out from your feet. The true story hits you and with it, the game becomes something else entirely and you truly get to see the real face of Burninton and the characters in said City. So if you’re looking for a game you can play by yourself right now and then with a friend just as soon as its local multiplayer update comes out and will take you for a ride, whilst boasting some dark and delightful tunes, then Little Inferno is one Switch eShop title you need to add to your line-up of Nintendo Switch titles. Therefore in light of all that, I think it’s fair to say that Tomorrow Corporation’s Little Inferno well and truly deserves a 7/10. Should you wish to try the game for yourself, Little Inferno is available now in the North American eShop and is slated to release in the European one on the 23rd of March. Or you can skip it altogether and buy one of Tomorrow Corporation’s other titles (World of Goo and Human Resource Machine.) The choice is yours.