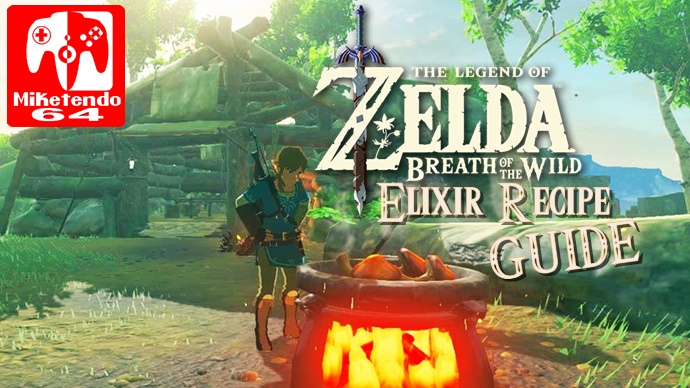 The Legend Of Zelda: Breath of the Wild has indeed broken from tradition of collecting hearts to restore your health and has also added environmental dangers that can harm you as well, be it atop of Icy mountains or Active Volcanoes to even braving the desert or running amok amidst a thunderstorm. To replenish life you have to cook items you have gathered and make dishes to increase the amount of hearts you can recover (Check out our Cooking Recipe Guide for more information). However, while some foods do have extra effect bonuses, sometimes you don’t want to waste a dish that could help you out later on just for an effect boost, this is where elixirs come in so allow us to present to you our Legend Of Zelda: Breath Of The Wild Elixir Guide!

Elixirs can be cooked in the same was as dishes but without the use of food items and instead, by using monster parts and remains, and a couple of insects and reptiles as well. To make a particular elixir for a certain effect boost, you must take account of the name of the part in question. Anything referring to fast movement like “Hightail” or “Hot-Footed” will give you a boost to your movement speed. Same goes for “Spicy” or “Sizzlewing” for extra cold resistance and “Thunderwing” giving you a resisitance to Electricity. Adding more of the same ingredient will make the elixir more powerful but adding two or more different effects will cancle each other out.

*Please Note that the fire under the cooking pot has to be burning otherwise you can’t cook the ingredients to make the elixirs. Rain can be your biggest enemy here so be sure to find a rain-free day to create your concoctions.