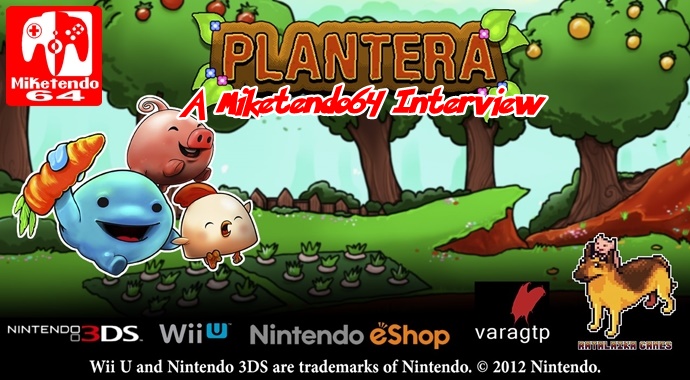 [Interview] Growing a Success with Plantera

If it’s one thing we pride ourselves on, other than trying to provide as much exclusive content that is different to everyone else’s, it is maintaining a positive and beneficial relationship with all those who we have contact with. One such relationship we have, is with Ratalaika Games, whom we first come into contact with last year and now that Plantera is available for Wii U and 3DS, we felt it was time to talk to Ratalaika’s Adrian Vega once again to see how the game is doing post-release. Here’s how we got on:

Hi Adrian, thank you for taking the time to do this once again. Would you mind starting things off by introducing yourself and telling our readers what is your position at Ratalaika Games?

Adrian Vega: Well, this one is easy! Much like the first question in most of the exams hehe. I’m Adrian Vega, Owner & main programmer at Ratalaika Games S.L. I’ve been working in game development a few years now and before that I was also a researcher at my University.

Miketendo64: Now this isn’t the first time we’ve interviewed you regarding Plantera, since Plantera was the game that first saw us cross paths. Except back then, you were working on the Wii U and 3DS port, whereas now, the title is released. So after months of excessive work, whilst juggling other titles, and Plantera is out for all to enjoy on Nintendo platforms, are you pleased with how the finished product turned out?

Adrian Vega: This question is a bit hard, when you are working on a game there is always a point in which you must stop or it won’t ever be finished so there is always things you would like you would have added or did differently and Plantera is no exception, I would like to work more on the size of the gardens and maybe try different approaches for the stats menu… But in the end I’m quite pleased with the final product if you ask me!

Plantera is Big in Japan:

Miketendo64: Despite how long it took for you to bring Plantera to the Wii U and 3DS, fan interest in the title never wavered. In fact, the long wait only seemed to add to gamers interest, so how has sales been for Plantera and which region has proved more popular?

Adrian Vega: I can’t go into too many details with regards to the answer to this question due to our agreements with Nintendo, but I can tell you that Plantera is our bestselling title at the moment. Also sales in Japan seem to be much higher than sales in Europe & America but has been available in Japan for longer and received a demo after been there long than in Europe & America and it received a demo 3 weeks after it launched in Japan.

Plantera Demo Launches on the 23rd of March!:

Miketendo64: Well with Plantera off to a great start by your standards, (especially in Japan) are there any plans/desires to expand on it in anyway, say a demo aimed for a Western release for players to try out, as an attempt to getting more players interested?

Adrian Vega: Yes there is! There is a demo coming and it’s already been approved by Nintendo QA, and it releases on March 23rd on both platforms [Wii U and 3DS] for both regions! [Europe and North America]

Plantera will come to PS Vita Sometime in April:

Miketendo64: As well as the Wii U and 3DS, which Plantera is already available on, you’re also porting it to the PS Vita. How is that going and do you have a rough idea as to when Sony fans can hope to get their hands on the lovable Plantera?

Adrian Vega: I’m glad you asked me that! We sent Plantera off to QA for SONY of America earlier this week and to PEGI to get the age rating! If things go well, we’re thinking of releasing it in the middle of April.

There are no plans for Plantera on Switch at this Time:

Miketendo64: And because we are talking ports, it’s time to ask the most popular question of all, that almost everyone is asking any developer, are there any plans/desires to bring Plantera to the Nintendo Switch?

Adrian Vega: Sadly at this moment in time, we’re not considering porting Plantera to the Nintendo Switch at this point. Who knows though we might consider it in the future, but right now, no such port is happening.

Failing to Live up to Expectations (Super Bomberman R):

Miketendo64: And because we’re talking Switch, did you purchase the newly released console and what do you think of Super Bomberman R since I already know you are a fan of the series?

Adrian Vega: Of course!! I was really looking to play Super Bomberman R, but after giving it a try I’m not 100% convinced with the Single Player mode and its isometric camera to be honest… Maybe I’m too nostalgic… But I loved the camera style of Neo Bomberman and I was expecting some levels with it besides multiplayer ones, also speaking of multiplayers I’m a bit disappointed that they didn’t included a difficulty selector for the AI! But I’m also playing Zelda and loving it!

Miketendo64: Moving onto something other than Plantera, when Ratalaika Games shared their plans for this year, (aka your recent report,) you mentioned a couple of updates. Any chance you can give us a rough idea as to when the Blasting Agent update will roll out?

Adrian Vega: Well Blasting Agent update has been approved on all platforms & regions at the moment but Wii U NA (some weird bug appeared on it and it’s been a bit delayed…). Once the update for Wii U NA is approved, we aim to launch the update sometime in the beginning of April.

Miketendo64: Other than what you have told us already and what is already known, is there anything else you can say about Ratalaika Games’ upcoming works or about Plantera in general?

Adrian Vega: Why not? I can show you a couple more screenshots of one our upcoming games. You will get more information on it soon enough… hehehehe.

Miketendo64: And now onto our final question, is there anything you would like to say to our readers and your fans?

Adrian Vega: Be sure to stay tuned to our social media channels as we will be sharing a whole lot of new details with regards to our near and distant projects, in the coming weeks.

As always Adrian, it is a pleasure to catch up with you and learn more about Ratalaika Games’ upcoming works and to learn that Plantera is doing exceedingly well, since the two of us first started talking about it. I look forwards to doing this again and continuing our chats!