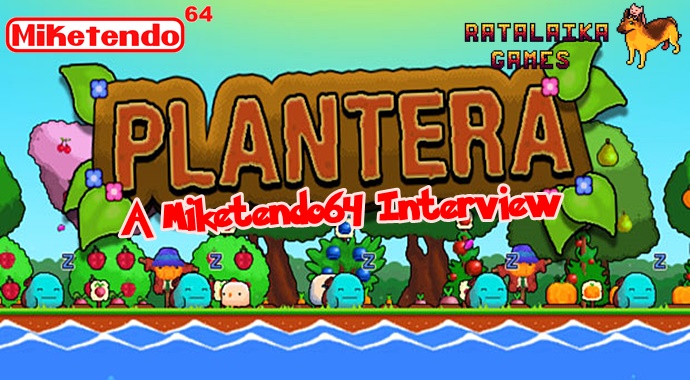 Ever heard of a game called Plantera? I’m sure you have, it’s not a game you would forget if you’ve played it on Steam, but just in case you haven’t, here it is in a nutshell. Plantera, is a VaragtP (VaragtP Studios) creation, which is a clicker game that is ideal for gamers who hate clicker games: “In Plantera you build your own garden and watch it grow with new plants, bushes, trees and animals. As you play and expand your garden you will attract Helpers, round blue creatures that will help you with your harvesting tasks.” And Plantera is now coming to the Wii U and the 3DS.

Responsible for the port is the Spain based, games development company Ratalaika Games and following their announcement of the port, we got in touch with the guys at Ratalaika and arranged an interviews. However due to all that’s gone on, we haven’t had the time to post our interview sooner, but later is better than never so here it is, the English version of it anyway: (Click here for our Spanish version of the interview:)

MadnessIsContagious: “Will the Plantera port for Wii U and 3DS be available as cross-buy?”

Adrian Vega: “Yes. After considering it, we have decided to support cross-buy between Wii U version and 3DS version. We hope you enjoy both.”

Miketendo64: “You recently announced you will be porting Plantera to the Wii U and the 3DS. Who approached who regarding the port?”

Adrian Vega: “We were the ones who contacted the developer, we had already played the game some time ago and we liked it, so we decided to contact the developer to see if he was interested in a port to Wii U and 3DS, and he said yes. So we started the port.”

Adrian Vega: “We hope that there isn’t, although it will depend of the possibility of putting  100% of the actual game on 3DS. We expect that there won’t be a need for changes but is still soon to say for certain.”

Talking Other Ports we Can expect to See come to the Wii U and 3DS:

Miketendo64: “Now Plantera isn’t the only port you have lined up for the Wii U and 3DS, there’s also Peasant Knight and League of Evil. How is development going on those and can we expect to see any of them realising this year?”

Adrian Vega: “There will be a beta of League of Evil in October for PC, but releasing the complete game on Nintendo devices will take more time due to the cross platform (Nintendo and Steam) system of sharing levels that we are developing. It’s the part in which we are putting more effort and it’s taking longer.

Regarding Peasant Knight, it will be complete around early 2017 because we want to release it after League of Evil. Plus it will also have a cross platform system of sharing levels.”

The Minotaur Will Not be Coming to the 3DS any time Soon:

Adrian Vega: “We aren’t thinking of releasing the Minotaur on other platforms due to the low amount of sales it had on Steam, and because we have at this moment, a large amount of work.”

The Benefits of Having your Own Engine:

Miketendo64: “Unlike most companies, you actually have your own engine (spiller.) How is Spiller working out for you and what made you decide you needed your own engine in the first place?”

Adrian Vega: “We decided to make our own engine because we wanted to release games for 3DS and right now that is the best option for a good engine performance. It is working pretty well because we made it compatible with all the platforms and that is what allowed us to port other developers’ games.”

Miketendo64: “Well it certainly sounds like it comes in handy!”

Why Ratalaika Do What they DO:

Miketendo64: “As well as just developing your own 2D games, Ratalaika Games also ports and publishes games developed by others. What made you decide to go down that path in the first place?”

How Long a Port Generally Takes:

BatManHadABaby: “Generally how long does it take you to port a game for Wii U and 3DS and how do they differ from porting a game to Steam?”

Adrian Vega: “It depends a lot in the size of the game and on what was it originally made on. It can vary from 3 months, for small games, to 10 months, for larger projects. Now the main difference is that consoles are more strict about quality in, meaning there can’t be any bugs or small errors. Steam doesn’t have that level of testing.”

The Process of Porting to the 3DS and Wii U:

Miketendo64: “Well, with the exception of the Wii U and the 2DS, you’ve pretty much had a game playable on each of Nintendo’s available home and handheld consoles since the GBA. Can we expect to see your relationship with Nintendo continue and see Mastiff publish a game for the Nintendo NX sometime in the near future?”

Adrian Vega: “Uff, it is complicated to explain the step by step process without getting into technicalities, let’s see how it turns out…

Usually we first analyse the game from the point of view of viability. Is the game okay for the 3DS? Is it possible? For example games with really advanced 3D wouldn’t fit, or games with extreme violence, nudity, etc that maybe Steam would accept but Nintendo probably wouldn’t.

After that we start working! we port the core of the game, that is how it is played and once that works, the game will be adjusted to the system. We add the functionality to the second screen or the gamepad. If it has anything else that can be added like Nintendo’s Miiverse, it is also added.  After that the only thing left is a lot of testing to check that everything works hehe.”

Miketendo64: “Well thank you for that explanation.”

No to Barcelona Games World, but Yes to Madrid Gaming Experience:

Miketendo64: “With Barcelona Games World and Madrid Gaming Experience occurring next month, will you be attending any of the events?”

Adrian Vega: “Yes, we wanted to go to both, but due to all the workload Plantera has given us, we realised we could only attend one of them. We will be attending Madrid Gaming Experience though because the date of the event allows us to finish the most urgent parts of the work. We will be there with Blasting Agent and Defend Your Crypt on 3DS and with League of Evil on PC so anyone can try them.”

“We do Have two Larger Games we Hope to Release on the NX:”

Miketendo64: “Being so you do port games to the Wii U and the 3DS, can we expect to see Ratalaika Games porting a game or two to the Nintendo NX?”

Adrian Vega: “Despite all the rumours about Nintendo NX, there’s still nothing confirmed from Nintendo, so we only can wait to see how turns out and after that decide if we are releasing on that platform or not. However we are working on 2 unannounced bigger ports that we consider to release on NX, because we are releasing them after the NX’s release.”

Thanks to Adrian, we got to learn a little about the Plantera port and a lot more about their porting progress and NX desires, so thank you Adrian for that exciting insight! And because that’s enough from me, I’m going to pass the baton back to Adrian, who has a message for the fans:

“Thank you a lot for all the support. We hope to keep giving hours of entertainment. Keep an eye open because we are closing new port agreements and working on our own games. We intend to keep going forward releasing fun games on all the platforms we are able to.”