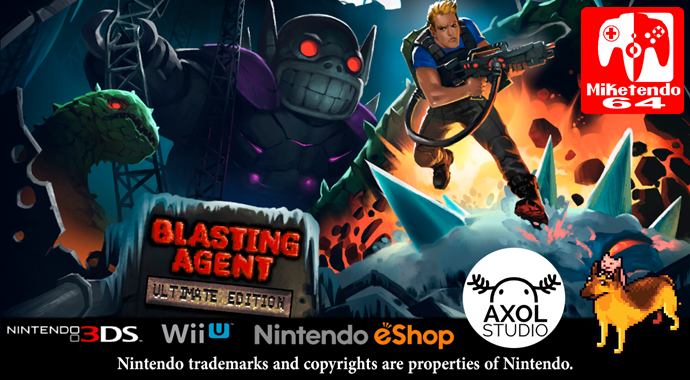 A Ratalaika Report: Upcoming Plans & Projects as of February 2017

This time last week, our good friends over at Ratalaika Games released Plantera and now that they’ve got the dual Nintendo platform release out of the way, they are ready to talk about what else they have planned for 2017.

While the report itself is not due to be sent out to various videogame media sites, we’ve been first access to it and the permission to share it, so please join us as we show off Ratalaika Games’ Plans for 2017:

Last week, we released Plantera in Europe & North America and in Japan on February the 1st. So far we are pretty happy with the feedback people is giving us about the game and at this moment, are working on bringing it to the PS Vita platform!

We do not have a release date in mind but we think it will be sometime during the next months for sure!

But this doesn’t mean we have forgotten about our beloved fans from Nintendo, as we’ve got some more Plantera news for you coming soon.

It’s been awhile since we ported and brought this action-packed title created by Axol Studio to the Wii U & 3DS eShop for North America and Europe, but we have a surprise for the players of this little gem! We have been working hard on a new update that is just packed with new content.

The update will include:

We can’t say when the update will be released, but it has been sent off to QA and we are hoping to release the update sometime in March!

We will also be porting Blasting Agent to the PS4 & PS Vita with the update included upon launch!

Back in October, we released our brand-new action-platformer League of Evil on Steam. Unfortunately the Nintendo version has yet to be released. Accessing the license for cross-play between Nintendo and PC took longer than we expected as it needed permission from Nintendo of Japan. This action-packed retro-style game features a great level editor with unlimited opportunities for developing your own missions, and can be shared online with the community.

You can play League of Evil on Steam now, and we will release the Nintendo versions a little bit later on in the year, with a PS4 & PS Vita release happening all at the same time, if possible!

This project is also affected by the same delay as League of Evil. Another title that needs a licence for the level editor cross-play between Nintendo and PC.

In the meantime, we are adding more content to the game! This new content includes more levels, more music and awesome boss fights!

This title, as you may know, is already available from Steam and the eShop for both Wii U & 3DS in North America and Europe. There are plans for an update, which will see 20 new stages added and various improvements but while we are working on it, due to some technical difficulties, the update has been delayed somewhat. The update is still going to happen, but it might be some time before we can send it off to QA. .

This was our first game we launched on the Wii U, back in June of 2016. It is a 2 player co-op platformer by Thinice Games, which we are now planning to port to the PS4 & PS Vita sometime in the near future.

Still it’s not just additional ports and updates we’ve got planned for this year, as we’ve got two new titles we’ll be porting to the 3DS as well! Now we could tell you what they are, but where’s the fun in that? Instead we’re just going to share a couple of images and leave you to work out what the games will be. Can you guess what they are?

Expect more information on the above titles to drop in the coming weeks, but what we can say is that both these titles will be releasing sooner than you’d think.

Now I don’t know about you, but “Upcoming Game 2” sure takes my eye, how about yours? Do you have any idea what it is? I’ll give you a clue, it is on Steam, like tons and tons of other games. Best of luck to all those who try to guess it!