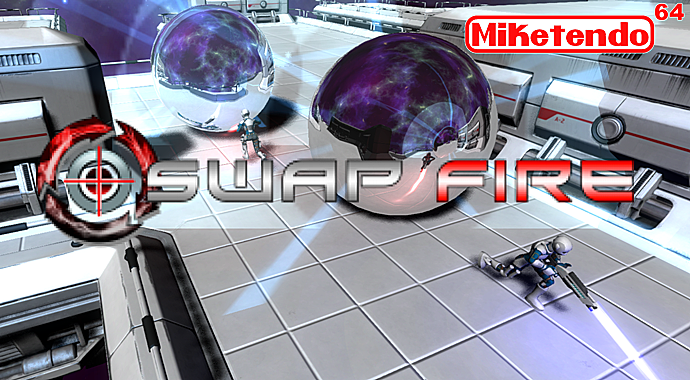 Swap Fire Coming To Wii U eShop This December

A Shooter game with a twist that makes you swap places with the person you shoot. Swap Fire changes the game of Shooters by centralizing around a strangely bizarre concept of teleportation by swapping your location with your target after you have blown them away.

The game setting is 2139 and Retro Quantum Industries (RQI) have invented teleportation but citizens are not ready to have their bodies transport through time and space and are terrified of the concept. RQI then come with an idea to sell teleportation and that is SWAP FIRE! A High stakes game show that features Teenage contestants utilizing the teleportation technology. The first season of Swap Fire was a success and sale of consumer grade personal teleporters spiked. It is now time for season two (Where this game takes place) and both the fans and RQI execs are eager for more!

Here are the features for the game.

And here is a video of the game in action

The development company behind Swap Fire, Midnight Status, will be hosting a Swap Fire tournament event at the “That Game Store” at Virginia Beach, VA. Here is the press release:
Swap Fire Wii U Tournament Saturday Dec. 10th“
That Game Store, Virginia Beach, VA – This weekend game players will partake in an all night lock-in hosted by a local game store and eSports hub. Typical Smash Bros., Naruto, and Overwatch will be joined by a new up and coming eSports indie game “Swap Fire” which just launched on the Nintendo Wii U eShop. The event will be co-hosted by Midnight Status and That Game Store. Gamers can expect a great time with host Ray Mead (owner of That Game Store) and Henry Meredith (a producer at Midnight Status) who will take on the role of commentator using the Wii U GamePad while competitors swap it out for victory.
Thanks Jeremy for sending this our way, I hope your event goes well and I look forward to seeing this in the eShop.