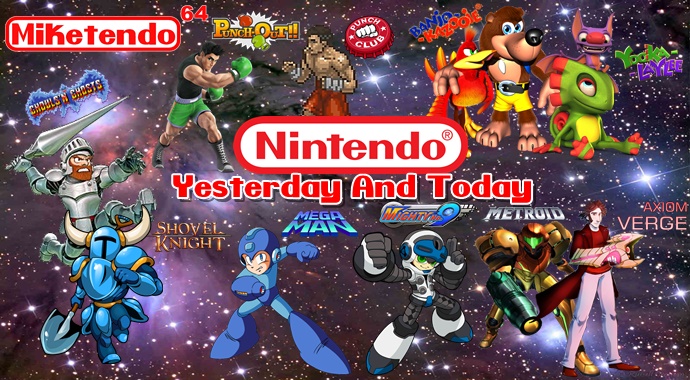 Continuing on with our series of posts looking back at the original Nintendo Heroes and the Spiritual Successors that followed them. In Part One which you can read here, we looked at Arthur from Ghosts N Goblins & Mega Man from Mega Man. Today we will be looking at the Rocky Balboa of the Videogame world, Little Mac of Punch-Out! fame and Gamers favourite Intergalatic Bounty Hunter, Samus Aran from Metroid.

Little Mac had humble beginnings on the NES where he had to tustle with various heavyweights to be crowned champion. with Doc Louis at his side every step of the way. During the 80’s boxing was all the rage and inspired many films including the Rocky Series. Punch-Out was no different and went on to produce it’s own sequels. However, in this day and age, the focus has moved more onto Martial Arts and Little Mac’s last outing in Punch-Out! was on the Wii. Though Little Mac does have a cameo in Super Smash Bros For Wii U/3Ds It seems that he has hung his boxing gloves up and retired from traditional Boxing. However there is another contender willing to take off the kid gloves and slap in a mouth guard and that is Punch Club!

The first rule of Punch Club is to definitely talk about Punch Club. Even though it is not actually a fighting game but a fighting Tycoon Simulator, this game takes you behind the scenes and basically puts you in Doc Louis’ shoes as you train and manage the fighter’s lifestyle and choose their fighting style and technique, from Traditional Boxing to underground Grudge matches. The art style of this game is based on the SNES era and hosts many references to Pop Culture and cult favourites.

She’s Hot, she’s sexy, she can kick ass and blast aliens to smithereens, She’s Samus Aran and after 30 years in the field hunting aliens and exploring labyrinthine planets this blonde bombshell seems to have packed away her power suit for the foreseeable future. She has had a long career fighting against Alien Dragons, Space Pirates, Mother Brain, Metroids and even the Federation itself. She first wowed gamers when they all thought she was male until the end of the game, when she took of her helmet and showed her long golden locks. She has appeared in many games since her first outing in 1986 but like Little Mac, her last real game was on the Wii and has been stuck in cameo roles ever since, including Smash Bros. Though it is a shame we may never get to play as the illustrious bounty hunter again anytime soon, we can still make our way through labyrinthine worlds in Axiom Verge.

Axiom Verge put you in the shoes of Trace, a Scientist who after a dangerous experiment is transported to an alien world known as Sudra with amnesia and has to make sense of it all while trying to find a means to escape. With plenty of plot twists and bizarre constructs. Trace is forced to collect power ups that also mutate him as he works with the Rusalki to take on and defeat Athetos. Axiom Verge does well to carry the torch that was once carried by Metroid and pays homage to the same gameplay and graphic aesthetic from the SNES Era. Thomas Happ Games have done well to replicate Metroid and were even going to include a Power Suit costume for trace in respect for Metroid, until the Big N declined the notion.

That’s all for this post. As usual, thank you for taking the time to read this and if you have any thoughts or comments, please be sure to leave them in the comments section below. Next time we will be looking at Banjo Kazooie & F-Zero.