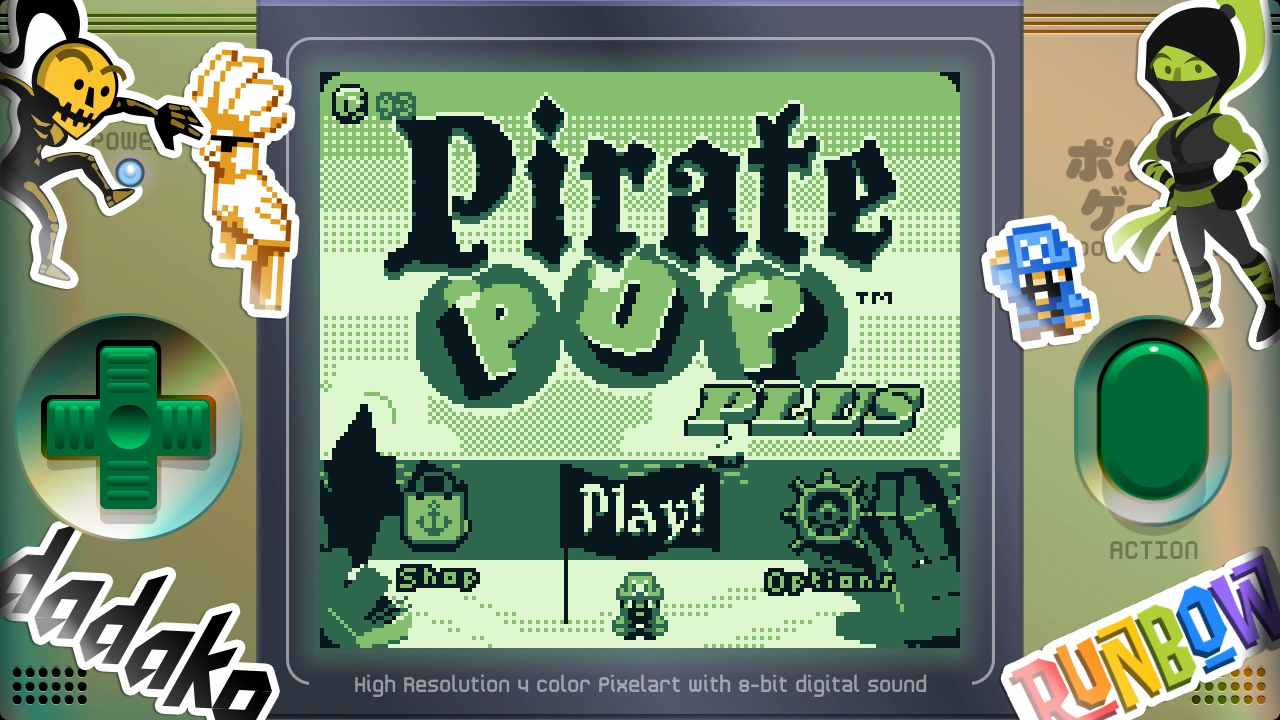 For modern gaming, this is probably as “retro” as it can get. Combining modern graphics with past gameplay mechanics, Dadako have created something genuinely unique for this day and age and that creation is none other than Pirate Pop Plus. The rules are simple,  move your character around the screen and pop the bubbles, the more bubbles you pop, the more points you score. More points can net you more coins, coins which you can use to buy extra characters, background music and accessories to customize your display including Faceplates. Borders, Buttons, Faceplates and Game Screen Colours. It is an easy game to get to grips with but trying to get a great high score can prove more challenging than it looks as the longer you play, the more difficult it becomes to manage bursting and avoiding the bubbles on the screen.

The story is as simple as the gameplay which we will get onto in a moment. The main character, Pirate Pete Jr, awakes to find that people are being floated away inside bubbles. He discovers that it is Bubble Pirate and sets out to put an end to his dastardly plans by using his trusty anchor to burst his bubble. That is it, no plot twists, no character development, not even a motive as to why Bubble Pirate is trapping people but then again a lot of games in the 80’s were all about gameplay and almost nothing to do with story accept maybe a window that appeared at the beginning of the game to give a short briefing of what the game is about. To be honest, who really needs story to get motivated in a game? Pac Man eats pills and Super Mario stomps Goombas, that has never stopped anyone from playing them though. You are an anchor wielding Pirate that pops bubbles and collects treasure, moving on.

This game only relies on two buttons to play, the D-Pad and the A button. The D-Pad moves your character across the screen and the A button makes your character launch his anchor to the opposite side of the screen with chain in tow. You have to burst the bubbles that the Bubble Pirate creates, using your anchor whilst avoid making direct contact with the bubbles. If a bubble touches your character, you will lose a heart and if you lose all your hearts, it is game over. It is simple enough to play and is the type of game you can pick up and play for a few minutes or lose yourself for hours at a time as you try and get the high score.

your character is basically trapped in a boxed off area with magnets on each wall that pull you towards them at any given time when governed by Bubble pirate, who constantly appears to create bubbles and disappears again. bursting these bubbles earn you points and they become smaller which earns you more points. The level location never changes and instead becomes increasingly more difficult as time passes, including more bubbles and much faster too.

There are power-ups you can collect which will grant you a temporary advantage of the ever increasing hazard of bubbles including a protective bubble shield, twin cannons and stopwatch. Pirate Pop Plus also offers two modes in which you can play, the standard or the hyper mode which cost 25 coins to play but will net you double points and also a lot more coins as will if you play well.

It looks like it was made for the Original Gameboy and Game & Watch because it was inspired by them and I think it has done well to catch the elements that made them consoles so intriguing to play. In a well that is hell-bent on the Next generation of graphics and making videogames more realistic, it is nice to play a game that takes it all back to basics, to the bare roots and says “I am still a game, I can still be played and enjoyed.” The display around the center screen is where the real graphical art can be seen. the detail in the buttons, the shading, how they move when you press the corresponding buttons on the Gamepad or 3DS. The surrounding screen looks even more amazing when you customize it with the in-game currency, especially the see-through look and the metallic look, really make the game pop. The center screen is also customizable and there is an array of colours available that you can purchase that appeals to you, along with the buttons and face plate. There are also decals you can puchase which further decorater the outer screen (As you can see in our Feature Image).

Matching in tone with it’s 8-bit theme, the music really feels at home and wouldn’t seem amiss on the NES or SEGA Megadrive, the tunes are catchy and with 4 to choose from in game (after purchase of course) you can alternate between them to maintain replayability. The sound effects are particularly good and are never too grating or irritating.

Is it really time for the Pros and Cons already? Well I guess there isn’t much else but to get to it.

Granted, all of my cons point to the lack of variety to physical gameplay that would sure give this game more playability but these can be easily sorted with an update or DLC in the near future to keep the game going. Then again, it is only around $4.00 or €4.00 in the eShop and the cross-buy option allows you buy one version and download the version for free so essentially it is like $2.00 a game.  I personally have played this on the Wii U but think is maybe more suited for the 3DS because of its accessibility to play it anywhere for any amount of time. On Wii U on the other hand, you don’t normally turn it on to play for just 5 or 10 minutes because you have a little time to spare. With that in mind and plenty of time to think on it, I give this game

Feel free to check out my gameplay video of Pirate Pop Plus below. This is Hyper mode with all the available decals to decorate my screen (minus the Miketendo64 logo and website of course).