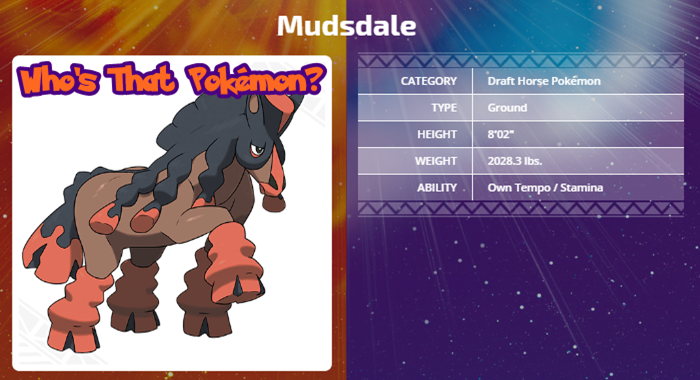 Welcome back to “Who’s That Pokémon?” the feature series regarding the Pokémon we can expect to see in the upcoming games. From Rowlet to Magearna, and Tapu Koko to Salandit, we have covered them all, but now that 6 new Pokémon were just recently revealed, it’s time for some more additions of Who’s That Pokémon? and in this particular post, we have come to end, so with no other Pokémon to talk about, this time it’s all about Mudsdale!

Description: “Mudsdale is known for its powerful body as well as its emotional fortitude, which keeps it from being agitated by anything. It never cries out, no matter what kind of trouble it’s in, and it defeats its opponents with a single powerful blow. Its legs are coated in protective mud, and the weight of this coating increases the force of its kicks. One kick, and a car is a pile of scrap!

Mudsdale’s running speed is not too swift, but it has excellent power and stamina. It can carry on for three days and three nights despite dragging loads of over 10 tons!

When Mudsdale gallops in earnest, the power of each hoof-clop can dig out huge holes, even in asphalt. Mudsdale is forbidden to run on some of Alola’s public roads.