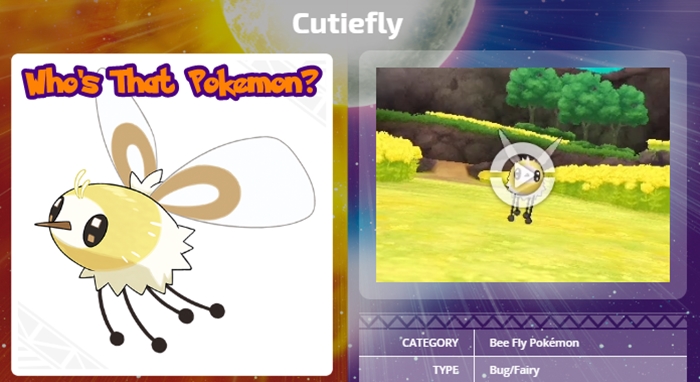 For every day that passes, is another day we move closer to the release of Sun and Moon and the closer we get, the more Pokémon we get to learn about. This is “Who’s That Pokémon?” A series of posts regarding the Pokémon we can expect to see in the upcoming games. From Rowlet to Magearna, we’ve covered them all, but now with the latest batch revealed, it’s time for some more additions of Who’s That Pokémon? and in this final post as we have now covered all the others who have been revealed, it’s all about Cutiefly!

Description: “Cutiefly can detect the auras of living things, including people, Pokémon, and plants. They search out flowers by the colour and brightness of their auras and then gather their nectar and pollen.

When living creatures are excited, it seems that their auras resemble those of flowers in full bloom. As a result, these Pokémon tend to gather near people or Pokémon feeling particularly happy or sad.

Cutiefly mostly live in the fields and meadows on the outskirts of cities, but they sometimes appear in towns and even inside buildings, drawn in by the emotions of the living beings of the community.”