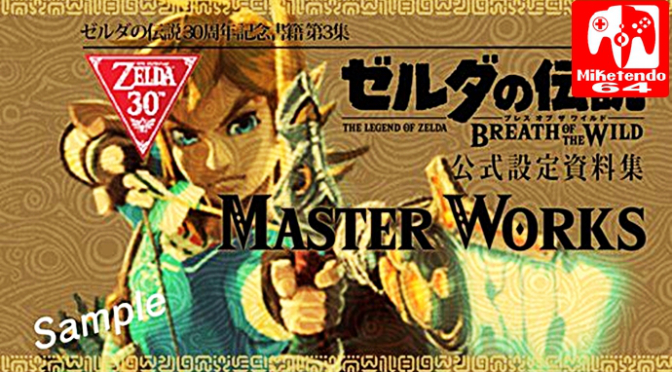 Hi Guys & Girls. Whilst looking up The Legend Of Zelda: Breath Of The Wild Master Works listing on Play-Asia, it gives a description of what you can find in its three chapters. Considered the third and final book in the Zelda 30th Anniversary Celebration, the first being Art & Artifacts, and the second being the Encyclopedia, The Master works focuses on Zelda: Breath Of The Wild.

It takes a look into the extensive Artwork that helped direct the art design of the game Illustrations, key visuals and official cover art for Magazines. There is a chapter that delves into the Making of Breath Of The Wild that includes comments from members of the development team along with a lot more information and images about the game and lastly the chapter that could hold the key to where Breath of the wild takes place in the timeline.

According to the listing it states that the following:

‘CHAPTER.3 HISTORY’
Based on the chronology of the series during the game, the book delves into the events that happened to update the Hyrule Historia.

Of course, this may just be to give more depth to the back story of Breath of The Wild as opposed to telling us where it actually takes place in it all. Unfortunately the book is in Japanese and as far as I know, no one has translated this chapter as of yet so we are still none the wiser. The Master Works has also been in circulation since December 15 so for there to have been any clarification since they could well mean that the confirmation of Timeline Placement is NOT included in the Master Works. However, it would still be interesting to see what is actually said in this chapter as it may give us more information into the story of Breath of the Wild of the events that lead up to Link needing the resuscitation chamber.

I for one know that in my heart, it doesn’t really matter where breath of the wild takes place because at the end of the day, even though it is much more than just a videogame. It has it’s own lore, and a huge cult following. The Legend Of Zelda Series never really had a set direction. The Developers themselves have admitted that the timeline was put together not because that is how the series of events were always lined up to be, instead it was to help fans establish some kind of order with the Legend of Zelda Series and find some kind of closure though the official timeline has posed even more questions than answers.

I like to think that with all the easter eggs and callbacks in Breath Of The Wild that hint at all the other games in the Zelda series, that perhaps Breath of the Wild takes place after all other games and joins together the split in the timeline that was caused by the events of Ocarina of Time. Maybe this will unite the timeline again, allowing the Zelda series to continue forwards on a singular path and may we never have to deal with another confusing timeline split again.

Well, thank you for taking the time to read my feature piece. If you haven’t already, please be sure to follow our website to stay up to date with all of our news, reviews, interviews, giveaways and more! We are also on Facebook and Twitter and you can also find us on Tumblr as well. If you have any thoughts that you would like to share with us regarding this feature piece. please be sure to leave a comment below!