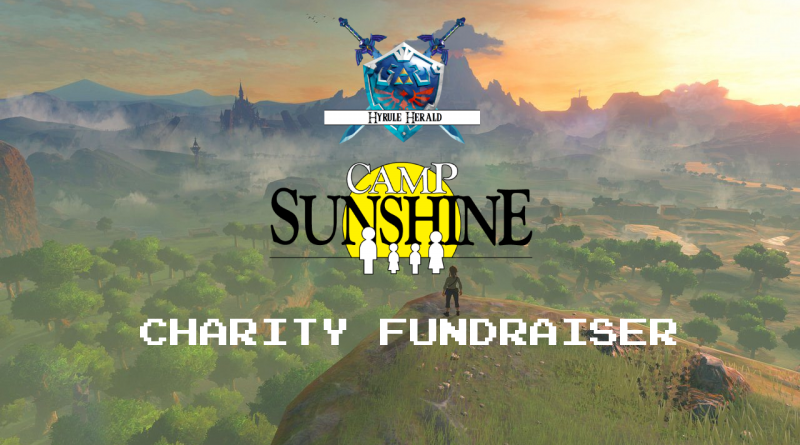 Our Friends over at Hyrule Herald & Ready Gamer One are hosting a charity fund raising event and giveaway to help raise money for Camp Sunshine which is a retreat for children with life threatening illnesses and their families. Their goal is to raise $1000 for the charity and will be giving away a Nintendo Switch with The Legend Of Zelda: Breath Of The Wild. You can check out their Full Announcement below

The Hyrule Herald and it’s podcast, Ready Gamer One, are looking to raise $1000 for Camp Sunshine, a retreat for children with life-threatening illnesses and their families in an online fundraiser.

Camp Sunshine was started in 1984 with the mission of providing retreats combing respite, recreation, and support and enabling hope and joy for children with life-threatening illnesses and their families throughout the various stages of any child’s illness. With sessions offered year round, Camp Sunshine books sessions that cater to the entire family, which includes on-site medical, psychological, and offers bereavement sessions for families coping for the loss of a child from a supported illness.

Starting Monday, August 14th, The Hyrule Herald will initiate the online fundraiser with a free Nintendo amiibo giveaway on their Facebook page. Once live, the fundraiser will function as an online raffle, meaning that every $1 donated, the entrant is guaranteed two “raffle tickets” that will be drawn at random throughout the week.

So there’s no confusion, if someone were to donate $5, they’d receive 10 tickets, $10, 20 tickets, $20, 40 tickets, and so on. There’s no limit to how much someone can donate. Also, a ticket has been drawn, that does not mean if there were more tickets in the mix, that the other tickets are taken out of the drawing. The more you donate, the better your chances to keep winning!

“We’re hoping people will donate for this awesome cause,” says Lucas Corbitt, managing editor of The Hyrule Herald. “Ben has done his his homework in selecting a great organization that will benefit children and their families. How could a Nintendo fan-site not choose this organization for a fundraiser?”

The grand prize for the giveaway is a brand new Nintendo Switch console and The Legend of Zelda: Breath of the Wild collector’s edition. The full fundraiser prize roster is below:

“Even after just a few hundred dollars are raised, my amazing staff has agreed to participate in some form of a mildly humiliating challenge that harkens back to the glory days of Nickelodeon,” says Ben Cornett, owner of The Hyrule Herald and Ready Gamer One. “When choosing Camp Sunshine and seeing their mission statement is about benefiting not only children, but their families and to make lasting memories, all I can think back is to being a kid and enjoying TV time with my family, which either alternated on some exciting NES game play or something on Nickelodeon or Disney.”

“A lot of us that worked together previously did these kind of challenges and what not before, and if it’s to raise money for charity, I welcome a pie in the face,” added Lucas Corbitt. “I have no problem looking silly if it’ll get us to our goal.”

The goal is set to $1000. When asked if the goal is not met, Mr. Cornett replied, “Unfortunately if we don’t get to the $1000 mark, then we’re not giving away the Switch. It doesn’t mean we’re not donating raised money to Camp Sunshine. We’re going to provide them whatever we raised, but I don’t like to think like that. I have faith in Nintendo fans. When it comes to benefiting children, most Nintendo fans will spare more than a dollar.”

“This fundraiser gives our brands a chance to stand up and be a beacon of hope. Ben tires to instill that philosophy into all of us that work with him,” says Branden Loera, Host of Ready Gamer One. “He always leads by example and I know for him, it’s not about how many likes, follows, re-tweets, or click-bait articles can get out there. For him, it’s about making a difference in the world and inspiring others to do so, too.”

When asked why he settled on Camp Sunshine, Mr. Cornett replied: “Camp Sunshine came to my attention when working on a project for my actual job. I had the great pleasure of working with the very talented and energetic Tomm Polos, and he opened up to me about Camp Sunshine and the charity work he previously did for them. Mr. Polos inspired me to choose this organization with his selfless act of giving and the hard work he put himself through in running up the Empire State Building. The least we can do is take a cue from him and inspire others.”

Winners for the contest will be announced through the week of the event. Once the winner is contacted and announced, they will have 24 hours to claim their prize before a re-draw occurs. All prizes will ship in September 2017.

For more information, stay tuned to our various social media channels and our podcast, Ready Gamer One.
Links:


Categorised in: Announcement, Breath of the Wild, Giveaway, News, Nintendo, Nintendo Switch, The Legend Of Zelda