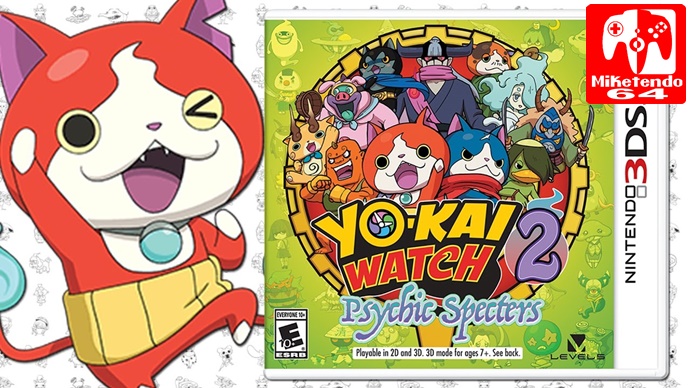 Yo- Kai Watch 2: Psychic Specters has been confirmed for an Autumn (Fall) release on Nintendo 3DS this year. Nintendo have sent out the official Press Release to all media outlets on their Press list (including us) which we have provided below for your reading leisure.

A SUPERNATURAL ADVENTURE AWAITS IN

The definitive version of YO-KAI WATCH® 2 arrives, with all the content of the original versions plus a large helping of brand-new Yo-kai mischief on top, including new quests, new locations and new Yo-kai to befriend

As the latest instalment in the YO-KAI WATCH® series of games, YO-KAI WATCH® 2 sees a group of sinister Yo-kai arrive in Springdale, determined to steal the Yo-kai Watch and bring havoc to the town and its residents. As Nate or Katie, the player must work to foil this wicked plot – exploring an expansive in-game world, befriending a colourful host of Yo-kai, and even travelling back in time to visit a past version of Springdale. Now, with YO-KAI WATCH 2: Psychic Specters, players can enjoy this epic adventure in its most definitive and complete form.

·         12 brand new quests, including one that delves into the origins of the mysterious Darknyan – combined with the quests from Bony Spirits and Fleshy Souls, this gives a total of 100 quests to tackle

·         The chance to befriend 15 Wicked Yo-kai, who have previously only appeared as adversaries – now giving a total of more than 300 playable Yo-kai

·         New locations to explore, including the fantastical Gera Gera Resort

Prepare yourself for the deepest and most immersive Yo-kai experience yet, as YO-KAI WATCH® 2: Psychic Specters launches for the Nintendo 3DS family of systems this autumn.