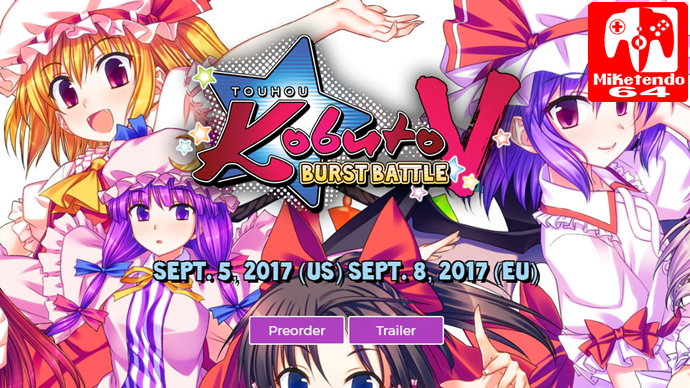 My oh my! NIS America really are a busy little bee aren’t they dood! Not content enough with just bringing one game to Nintendo Switch this year, today they have announced a second will be releasing this year as well and the second game is none other Touhou Kobuto V: Burst Battle and you can read all about it via the informative paragraphs below:

Santa Ana, CA (May 17, 2017) – NIS America is pleased to announce that Touhou Kobuto V: Burst Battle will also be arriving on the Nintendo Switch™ in addition to the PlayStation®4 (physical and digital) and PlayStation®Vita (digital-only). Due to this, we regret to inform our fans that the title’s new release date will be September 5 in North America and September 8 in Europe to accommodate launching on the additional platform. Engage in exhilarating battles on the Nintendo Switch™ wherever you go! The PlayStation®4 version of the game will also be compatible with PlayStation®VR for the ultimate immersive experience!

Just in case it wasn’t clear, there will be a physical release of Touhou Kobuto V: Burst Battle, just like there’s a physical release of Diagae 5 Complete next month and if you’re still wondering if it’s worth getting, you can always click right here to check out our review of the upcoming Switch title. But wait there’s more! Touhou Kobuto V isn’t the only piece of news NIS America had to share today, because there’s a new game overview trailer for Culdcept Revolt and you can see it right here:

For those of you who love what they say, do remember Culdcept Revolt comes to Nintendo 3DS on August 29th for North America and the 1st of September 1st for Europe and that concludes all of our awesome NIS America news for today. Cheers for reading dood!