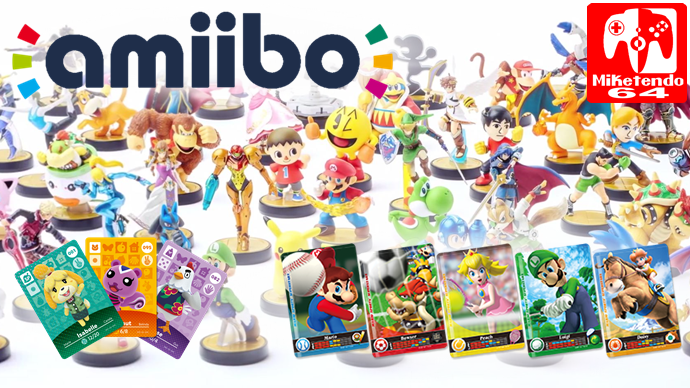 [Editorial] What’s The Next Step For Amiibo?

I am sure most of you have come to notice that the hype around amiibo is starting to dwindle and that stock shortages continue to hinder any avid amiibo collectors hope of getting their hands on their favourite characters. With retail stores constantly in short supply of the more popular and sought out characters and scalpers on Ebay making a heavy profit, things have only improved slightly since amiibo were first released upon the World. Though you can still get your hands on most of the Smash Bros amiibo and Animal Crossing amiibo are in quite high supply, the latest line of Legend Of Zelda amiibo went like wildfire and have all disappeared off shelves and ended straight up on Ebay for at least twice the price.

Though amiibo are still popular, they are not as popular as they were and are still not being used to their full potential. When they were first released, they could be used with Super Smash Bros For Wii U & 3DS and allowed you to train your own CPU character to fight alongside you or as a formidable opponent to really hone your skills. Now they seem to unlock little in-game extras that you can either take or leave and don’t seem to be worth the price of $14 just to unlock a costume. True, most amiibo are compatible with plenty of other games on Wii U & 3DS but other than as collectible trophies that unlock small items. Are they really worth it?

Nintendo have obviously though this as well as they launched a line of amiibo cards based on the Animal Crossing Series and recently, the Mario Sports Superstars amiibo card series and whilst it is too early to tell for the Mario Amiibo cards. the Animal Crossing amiibo cards have sold far more than the amiibo figures themselves. Of course, the cards come together in packs whereas the amiibo figures are mainly sold singularly with the exception of some multi-packs like Splatoon or the Zelda: Wind Waker pack but the price reflects that as well by costing more depending on how many figures are included.

So let’s talk about amiibo cards and how they can continue to drive the amiibo brand whilst being a cost effective alternative to their figure counterparts yet more successful for Nintendo in the long run. With the way Nintendo are moving with the Switch, Amiibo figures will be quite impratical for Switch owners to enjoy their gaming experience lugging around a bag or carry case full of amiibo figures that will be bigger and heavier than the Switch console and its own accessories. The figures had a good run and are still highly prized amongst collectors. Hell, I have at least 40 of the things myself and most of them directed at my two favourite franchises, The Legend Of Zelda & Super Mario. They do look amazing but offer little practicality when playing on the go. For example, you aren’t going to be riding the bus or a train for School or work and decide to crack out a plastic figure to place on top of your Switch as you scan it, people will look at you funny and think why is a grown person playing around with plastic toys? Amiibo cards on the other hand would be far less conspicuous and people will hardly bat an eye.

Cards are also much easier to carry around and far more practical. You can slide them into your pocket or Switch case and whip them out when you need to unlock an important item. They will also bring trading back as people will swap their cards with others to get characters that they want. Most of the success of Pokémon Trading Cards is because of their trading aspect, Super Mario might be quite a common character but Captain Olimar may be a harder card to find or Marth even, so people may have to trade more cards to get them or buy more packs in the hopes to find them. Cards are more cost effective and people can rationalize buying them better as regards to the content they can reward you in games better than buying the amiibo figures, especially if they have had to resort to buying obscure figures for more than twice the price and beyond because of scalpers (Yes I am looking at you, the Little Mac amiibo at $500.00).

Of course their are some drawbacks like trying to get your hands on a particular amiibo card and having to buy several packs for a CHANCE of getting said amiibo card but then again, that is where trading comes back into it. Also amiibo cards can be specialized to a particular franchise so you know in particular which characters are available in each series. You won’t find the Link amiibo card in the Animal Crossing Series, same for KK Slider won’t be appearing in the Smash Bros Series or Samus Aran in the Super Mario Series. This will also help Nintendo on where to focus their attention to which series of cards are selling better and also the manufacture of the cards is far cheaper and quicker and can provide a much faster turn around than figures.

Now until Nintendo make amiibo cards their next true direction for the amiibo brand. we are still left with stock shortages on amiibo figures and store shelves brimming with unwanted “Common Figures” that they can’t even shift with a “Buy One, Get One Free” offer. So what does this mean for us, the consumer? As we struggle to get our hands on the more obscure characters, unnofficial third-parties have found a niche which profits from Nintendo’s lack to maintain good supply at reasonable cost and have taken to print and sell their own amiibo cards.

I have always supported Nintendo, I have bought their consoles, their games, their amiibo figures and accessories but they does come a point where the supply does not meet the demand and we are left with our hands a little empty. Waiting for pre-orders to open on amiibo and then realising you are too late and that stock is already out in less than 15 seconds of being online, well it can make you take to more unnofficial measures. Printed amiibo cards have begun appearing on the online market space and there is certainly a demand for them. I recently had a seller send me some of his amiibo cards which include two amiibo that aren’t even out yet officially. The cards themselves of course work and can be scanned thanks to the NFC tags that can be purchased online. They are then written on with the appropriate data and sandwiched between two pieces of card or paper with a printed image that corresponds to the data written on it. In my case, the cards come with the box art that can be found on the packaging that comes with the amiibo figures and are also laminated which will make them much more durable against wet or grubby hands or get affected by the sweat or oils our hands produce as we touch them.

I am quite pleased with the quality of the cards and they are indeed a more cost effective option as opposed to the amiibo figures and though it is wrong of me to condone this kind of copyright breach if you will, it is something Nintendo should be doing themselves anyway, especially now if they want to continue selling the amiibo brand alongside the Switch which is a lot more streamlined than the bulky Wii U Gamepad and nobody these days wants to carry little figures around in their pockets like they are 5-6 years old. Amiibo cards on the other hand can be carried next to the Switch itself and are much easier to store and manipulate and have more possibility to be traded with other people as we will no doubt have duplicates of various amiibo cards that we get out of random packs.

Well thank you for making it to the end of this editorial, I am sorry it was a bit long winded. If you have any thoughts or opinions you would like to share with us, please leave them in the comments below. Do you think Nintendo should drive the amiibo brand via card form? Would you rather Nintendo provided more supply of amiibo figures instead? Is Bootleg amiibo cards the way to go until Nintendo realise the potential market they are missing out on? Do tell us, we want to know your thoughts.