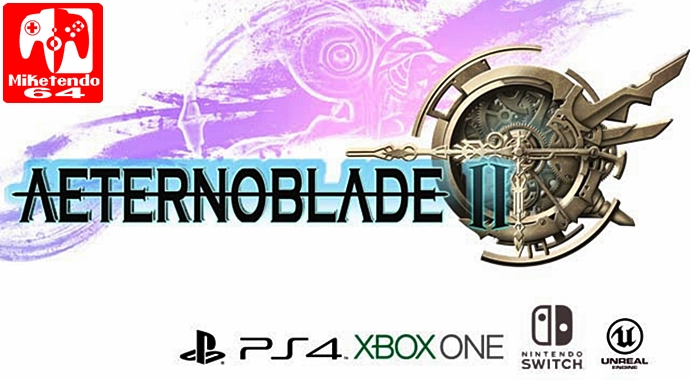 Corecell Technology are working hard on AeternoBlade II and they want to bring it to Switch as well as other problems, but dreams aren’t enough to make a game a reality, but money is!

As a means of financing the game, Corecell Technology has started an IndieGoGo campaign and as long as they meet their $30,000 US dollar goalpost, AeternoBlade II’s release can be guaranteed! But before you start thinking why would I donate money to a game I know so little about?” Well get ready to learn about it because the IndieGoGo campaign has lots of information and images and we’re going to share some right now!

Hi, It’s me “Toptanian” again. After the success of AeternoBlade . Which we are very thankful to our fans. More than 50,000 copies worldwide have been sold via major Console Platforms including 3DS, PS4, PSVita.

We are ambitious to make AeternoBlade reveal more story of our main characters. Many fans ask us about Bernard. How can he be imprisoned in the Everlasting void?

Want to know that? AeternoBlade II will reveal all the story about him.

In AeternoBlade, because the limitation of the budget made us a lot of constraining to finish the game. But AeternoBlade II, we are now can aim to the better quality of gameplay and graphic.

We read every comment, listened to every YouTuber reviews our game. All the problems, we’ve learned and will be correct in AeternoBlade II.

By practicing the team for Unreal Engine 4 for 2 years. Now, we are sure that AeternoBladeII could be the great game for our fans.

However, we still want to make the higher quality of cinematic action, gameplay, sound and story-telling. So, Indiegogo campaign would be a great chance for us to help us reach that point.

Well, it is the great time for our fans to contribute to YOUR GAME. Support us making the great sequel of the time manipulation action & puzzle genre. This help would not only making AeternoBlade II success, It will show us that we have many gamers love our game. Then we will plan more spin-off and side-story of AeternoBlade.

Don’t leave us walking alone. Please show up and support us.

Make Sequel to this AeternoBlade Series with us!

After the event of AeternoBlade. Freyja has been living a peaceful life with her friends at the Ridgerode village. One day, The dimension begins to unstable and the existence of this reality seems to be disappeared. It is the cause of her actions to changed the world lines. To fix this, her journey begins once again. On the other side of the world, two warriors, Bernard and Felix. Head to Eternity Fortress according to the Chronos Kingdom’s ‘Oracle’ to stop the disaster that foretold to have occurred from a strange dark hole appeared in the sky, their fate exists will be revealed in AeternoBlade II.

Granted there are a lot of typos in the text above and in the rest of the information provided throughout the IndieGoGo campaign, you should by no means let it impact what you think of the game. So what are you waiting for? Click on the link below and help bring what will be an exceptional game to the Nintendo Switch. As a game, it is your solemn duty to do so dood. (I have got to stop playing Disgaea 5 Complete. The Prinnies are a bad influence on me.)