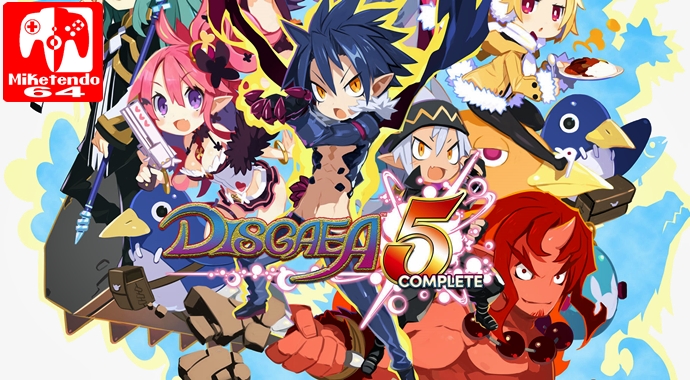 After already released on the PlayStation 4 back in 2015, the 6th instalment of the Disgaea series (Disgaea 5: Alliance of Vengeance) made its debut on a Nintendo platform when it released on a Nintendo Switch back in March for Japan, and this month it finally comes West and it really is one heck of a Strategy Role-Playing Game!

Whether you love the Fire Emblem series, Final Fantasy or even the newer Bravely series, if they all got together and had a child, that child would be the Disgaea games and they really don’t get much better than Disgaea 5 Complete. It really is a fantastic and mesmerising game that will grip you hard by the throat the second you start playing, so I hope you got round to finishing The Legend of Zelda: Breath of the Wild and have no desires of playing Mario Kart 8 Deluxe for a couple of weeks, because Disgaea 5 Complete is going to dominate your life and your dreams for the next weeks, if not months.

Not only is Disgaea 5 Complete a game with plenty of humour, lively characters with very different personalities, but while it does cost a hefty $59.99 US dollars, the price does buy you hundreds of hours of top-notch gameplay and there’s also the fact that the Switch version of Disgaea 5 Complete is named as such because as well as featuring all of the content first seen in Alliance of Vengeance, but it also has all of the DLC available for free as well.  (Complete by name. Complete by nature.)

But even then, having said that, I have still yet properly given you a good grasp of just how large the scale of this game is, so here’s me trying a little it another way, Disgaea 5 Complete may not be directly on par with Breath of the Wild, but it is awfully damn close. Sure the Pocket Netherworld is virtually empty when you begin playing, but give it time and plenty of levels and scenarios and before you know it, the list of things you can do becomes virtually endless! Want to send a squad of team-mates off on a mission? You can. Want to take enemies you fight prisoner and then beat them while you interrogate them? You can do that too. Heck you can even cheat your way to ensure battles go the way you want them too! (Earn more experience but less HL, aka money? Go right ahead! The Cheat Store has cheats like that one and so much more just waiting to be used!)

Or you can take to the Strategy Room and bribe a couple of Senators in the Dark Assembly room, to pledge their support to your bill of having more Prinnies (Penguins who have to say Dood at the end of every sentence as that is Prinny rule #1 and explode upon impact when thrown in battle,) from your Pocket Netherworld. But if the vote doesn’t go your way, you can even force the opposition to support your cause, but don’t just settle on Prinnies! Via the Strategy Room you can choose different colours for your chosen characters and find a certain Zombie Maid who can see to it that Overlord of Gorgeous, Seraphina wears a certain bunny outfit when in the Pocket Netherword, aka Disgaea 5 Complete’s hub world.

Essentially whatever you love to do/see in a videogame, Disgaea 5 Complete has it and it just works great. It truly is an immersive world/game and you don’t even need to be a fan of the series to enjoy it, but I have said everything above and I’ve not started on the story yet? What is wrong with me? So let’s correct that by sharing the NIS America shared story:

In a galaxy, darker than the pitch blackness of the universe, countless Netherworlds exist. In each Netherworld, there is an Overload who reigns over its hot-blooded demons, and maintains the balance of the Netherworlds by keeping the others in check. But the sudden appearance of Demon Emperor Void Dark and his army, the Lost, has ravaged many Netherworlds, forcing them to surrender.

At the same time, there’s been a young demon that stands alone against the growing powers of the Lost. His name is Killia. He is an unknown demon that swore to take revenge on Demon Emperor Void Dark, and defeat the Lost that’s been destroying various Netherwords. Unexpected, he happened to save Princess Overlord Seraphina. Killia, accepted by Seraphina as a capable servant, has begrudgingly agreed to accompany her to overthrow Void Dark…

From that point on, the game can truly get underway, as players finally get control of Killia (who is the very first character you can use to navigate the Pocket Netherworld, which is in actual fact Seraphina’s Pocket Netherworld, prior to being able to use other characters further on down the line), and Killia is most certainly an interesting demon. Not only does he have a truly dark and evil side, but he also likes to consume a big bowl of something he had whipped up himself, mere moments prior to battle. But don’t hold it against him, when it comes to fighting, he really knows his stuff and he is one of the better characters in the whole game, which is not an easy thing to say, since there one so many great characters in the game, but more on that later.

So yes, Killia knows his stuff so well that throughout the game he will essentially teach you everything there is to know about battling. From the basics of moving and attacking, to using Special Moves, certain effects some levels have like sea that will cause you damage at the end of your turn if you’re standing in it due to being poisonous, to even picking up and throwing allies and that’s just the tip of the iceberg! New to this instalment is the Revenge system, which triggers when an ally falls in battle. There’s the ever fun Overlord abilities that do vary, since each Overlord has their own special power and there are quite a few you can add to your team and use in battle and there’s a new type of special attack too called Maougis.

If I’m honest, while I like seeing the attacks and that, and levelling up my various characters and learning skills and the like, I’m not a fan of how long winded battle can be at some times. It really makes me miss the good old Aut0-Battle function some games has, but I wasn’t going to let something so minimal get in the way of me properly enjoying all that Disgaea 5 Complete is and its many characters. Okay sure Seraphina is full of herself, but that’s the way she’s meant to be and Dark Void? What the hell man! I was rooting for you and everything, but seriously? How dare you do what you did? You deserved your comeuppance! As for you Red Magnus, you’re just SUPER!

Still if you like me are not a fan of Disgaea’s chosen and very long-winded battle mechanics, at least there is plenty of variety thanks to having more than 40 job classes, characters of all kinds to buy, use and kill and as previously hinted at, a hub world where almost everything can be done. A hub world which offers Quests for you to take on and complete, plenty of in-game achievements and even an entire Item World! In short, there is no shortage of things to do as far as Disgaea 5 Complete is concerned. It is a game you can spend hundreds and hundreds of hours playing and it will still be enjoyable, and I don’t think I will ever stop talking about it as far as this review is concerned and that’s not a good thing.

If I allowed myself to, I would literally talk about everything and anything, which would make this already long enough review, three times longer and no one wants that, so I’m going to take a moment, compose myself and think up a good way to end this review, whilst trying to cover anything I have missed, because it is time this review ended.  (Plus I can’t go revealing everything now can I? I do want there to be some surprises for you!)

So Disgaea 5 Complete. What kind of a game is it? An absolutely fantastic one I say. It’s great beautiful artwork, spectacular and fluid cut-scenes, like the opening movie, but it’s also got great music, tolerable voice acting, a rich story that does get better the more time you invest into the game and a hub world with plenty to do and see. In no way do I think Disgaea 5 Complete is miles better than The Legend of Zelda: Breath of the Wild, but it is just an immensely terrific and lovely turn-based combat game for players to give themselves over to. A game where you can spend hours creating your perfect units, only to reroll them via reincarnation, restoring them to Level 1 and dedicating more time to making them even better! A game that educates you on its controls, in the best way possible, but also plays as an exceptional title when as a home console experience thanks to TV more and a righteous handheld game when out and about with your Switch. Despite all of that though, as much as I would really like to, sadly I can’t do it. I can not give Disgaea 5 Complete a 10/10, but I can most certainly give it a 9/10 and would gladly recommend it to everyone. Sure it’s rather pricey, but in terms of what you actually get for that money, the price is actually rather cheap for what it is and if this review is not enough to dedicate yourself to purchasing the game, well there’s a demo available in the North America Switch eShop, which comes to Europe on the 19th of May. You can always download the demo and see for yourself if this is a game to your liking. But as far as this writer is concerned, Disgaea 5 Complete is a game that is just too good to pass up and miss out on!