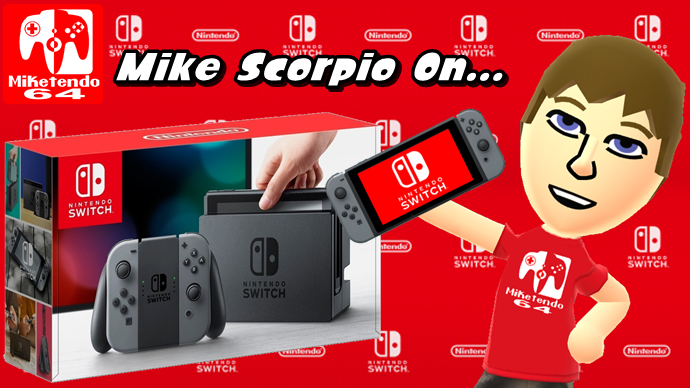 Mike Scorpio On… The Nintendo Switch

I have at last managed to get my hands on Nintendo’s newest console, the Nintendo Switch. After playing around with it for a few days and getting to learn it’s features and modes of play, I have found it to be a very enjoyable system. I was put off in the beginning because I wasn’t ready to give up on the Wii U yet and the fact that the Switch had a relatively weak launch line up and depended heavily on the success of The Legend Of Zelda: Breath Of The Wild to sell units.

Well I will admit that it was hasty of me to feel that way and when I had the chance to get hands on with it, I was surprised with how much I actually like it. Though the Joy-cons can feel quite small in the hands, the actual tablet of the Switch is a decent size and displays gameplay beautifully. I was never one for handhelds as I prefer the better resolution of Home consoles and playing on a bigger screen but the Switch merges both worlds together and the fact that you can play Home console games like Legend Of Zelda & Mario Kart 8 on the go with stunning graphics won me over. The option to dock the Switch to play on the TV was the icing on the cake and now that the dock will soon be available to buy separately means I can now play on literally an TV in my house (Especially the big one in my lounge).

I especially like the fact that the console comes with two controllers already which means multiplayer games with friends right of the bat. Super Mario Kart 8 Deluxe, Super Bomberman R & Splatoon 2 can be played on a single Switch console or linked across several consoles via local wireless or online which really opens up the options to play with friends both nearby and around the world. Of course, you can kind of already do that on a home console with friends and play online but to be able to do it literally anywhere with anyone is a big win.

I did have some gripes with the console where sometimes the right Joy-Con wouldn’t read connected to the Switch or make the “Click” sound, yet would charge no problem but after sliding in and out of the wrist strap connector a few times, it now connects and reads fine. The personalization of your Mii Avatar of Profile pic is more diverse and gives you a lot of options including background, Expression, pose and up to 12 characters to use for your username. It’s a shame it isn’t 13 characters, so I could have Miketendo64 as my profile name but Mike M64 will just have to suffice. there is also an option to change the Theme of the Switch but it is rather limited between Black or White. It doesn’t bother me too much but I can see the possibility to add other Themes like the 3DS. A Zelda, Super Mario or Splatoon theme would be nice to liven it up and make each Switch more personal but I suppose we may have to wait until Nintendo offer them up as My Nintendo rewards.

I touched on the lack of Launch titles earlier but after waiting a few months before playing with the Switch, there are actually some solid titles on it. I have never played a Bomberman game but Super Bomberman R is a pretty good title to play alone or with friends. Mario Kart 8 Deluxe is worth it just for the revamped battle mode and some of the third party titles don’t cost an arm or a leg to purchase. However, bear in mind that the Switch only has 32 gb memory so if you are going to be downloading most of your games, you will want a good internet plan and some Micro SD cards with plenty of memory space.

As regards to features. The share button is a well needed and a long-time waiting addition that allows gamers to share screen shots of their gameplays and share them via social media. Nintendo have said that the possibility to share video captures has been taken into consideration but it is not known when or even IF it will happen. Regardless, the option to directly take screenshots and then upload them online is a vast improvement over the debacle of doing it on the Wii U in which you had to hit the home menu, load up the browser and then you will be prompted to share. Features that have not yet been added including an Internet Browser, YouTube or even Virtual Console I thought was a poor move on Nintendo’s part but now I realise that the console doesn’t really need them. They would be welcome additions for sure but are not necessarily essential as there are plenty other devices that can offer them and We know that the Virtual Console is coming eventually but when it constantly repeats the same games with every generation, I feel that unless it is going to start bringing Gamecube games to the Switch, there is really no need for it on the Switch if you already have most of the games in the Virtual Console Library already on the Wii, Wii U & 3DS.

On the whole it is a very good console and may have just converted this Home console Gamer into a handheld aficionado. I am already eyeing up what kind of accessories to buy with it and what games I should get on it next, including pre-orders for Street Fighter II: The Final Challengers, ARMS & Splatoon 2 and I look forward to taking my Home console gaming experiences with me on the go so well done Nintendo for bridging the gap between Home consoles & Handhelds, whilst still maintaining quality games and wrapping it up into a pretty sleek package. You have managed to take what made the 3DS so popular and created a console the Wii U always strived to be but never managed, hat’s off to you.

What did you think of my thoughts on the Nintendo Switch? Do you own the console and think differently? What features would you like to see come the console? LEt us know in the comments below.