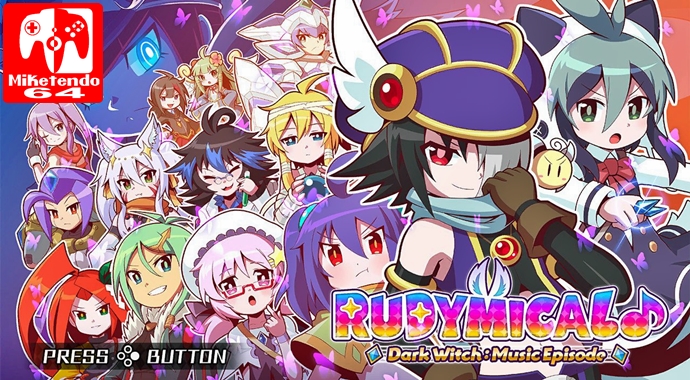 Sometimes gamers are left years waiting for a game they can’t to be released after being announced and sometimes they only have to wait a few days and Dark Witch Music Episode: Rudymical is most definitely the latter!

So other than being a rhythm game, just what kind of a game is Dark Witch Music Episode: Rudymical? Well that’s what we’re going to find out through the review and since I do like to cover the story as early as I possibly can, instead of my usual short summary, I’m just going to share the entire Japanese voice acted dialogue that relates the story:

A miraculous stone that allows humans to use magic.

Magic helps innovation. People use it as a tool in their everyday lives.

The Germa empire in the East continent is known for their magical studies.

Collecting the best researchers around the world, Germa created the strongest research faculty in history.

Among them, the “Ich” Research team is notorious.

“Whoever stands against Germa will be overthrow by the magic Ich creates.”

Ich is now known as a force to be reckoned with – a threat to other countries.

Aware of Ich’s reputation, Germa sends Ich to the neighbouring country Liana to secretly continue their research there.

Now, Germa is about to declare war from Liana.

A God, looking at mankind from above…

A young aristocrat looking for her powers…

And a researcher, looking for a good time…

Each begin their own story amidst the turmoil…

When you first start playing, although three characters are shown, only two can be accessed right off the bat, which includes The Dark Witch Zizou herself, (aka a God, looking at mankind from above), and Sola (aka a young aristocrat looking for her powers). As for the third character, that’s Rudy, (aka a researcher, looking for a good time) and she can only be unlocked if you acquire enough Syega, which can also be used to purchase alternate outfits for the three protagonists.

As for getting the Syega though, that’s where things get interesting as Syega can only be acquired by achieving a Rank of A or higher from any of the games stages, on any difficulty. (When first starting out, there are 8 stages and bosses in all, but beating all 8 will unlock another 4 stages and associated bosses and beating them will unlock the final stage. As for the ranks though, they consist of C, B, A, S and S+). But getting an A or higher is not an easy task, as you will need to ensure you do your very best and hack those Boing-Boings at the right time to get as many Perfects as you possibly can and don’t miss a single Boing-Boing as this will impact your final score.

But just in case you find the game too difficult, try playing on an easier setting as Dark Witch Music Episode: Rudymical has four available (Easy, Normal, Hard and Lunatic, but Lunatic can only be unlocked by beating every stage once), you can of course skip the 1 Player story mode and try out the split screen co-op mode instead, as you and a friend go toe-to-toe against the bosses you couldn’t beat, armed with a single Joy-Con Controller each. Or you can forget the story altogether and just mess about with VS Mode for an hour or two instead, as Dark Witch Music Episode: Rudymical can get a little addictive.

Other than all of the above, there really isn’t all that much content to Dark Witch Music Episode: Rudymical, but that doesn’t mean it isn’t good. Sure the English language as good as it could have been in some places, but the small typos do not ruin the game and the in-game instructions are very easy to read and understand. But more than that, Settings comes with the option of toggling Rumble on and off and even the voices for both the player’s character and opposing bosses can be turned off, allowing you to silence the grunts and groans of the characters voice actors and instead give yourself over to listening to the original soundtrack composed by Raito and even then that’s not everything!