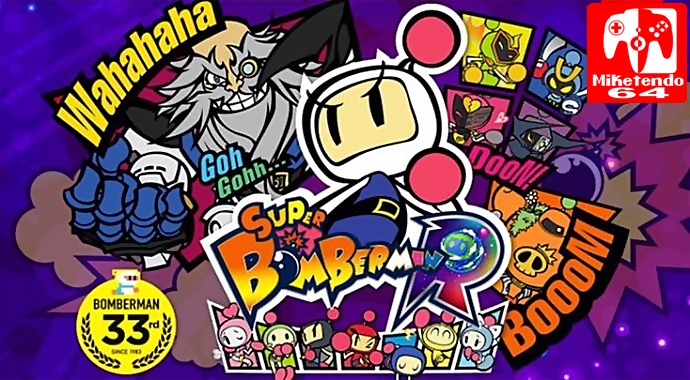 Konami have just released a Press Release announcing the new Free DLC that is now available to download for Super Bomberman R on Nintendo Switch. Update version 1.3 officially confirms 4 new stages, 2 new accessories and the ability to change the enemy AI difficulty settings along with other tweaks and changes. You can see the press release below.

New DLC for Super Bomberman R will include:

Super Bomberman R will also receive an update today, which offers a series of improvements and features. As part of the update, players can experience ‘Battle’ mode in 60 fps and have the option to choose the AI’s level of difficulty, as well as change the camera angle in ‘Story’ mode. Additionally, various adjustments have been made to improve controls, fix minor bugs, among others.

・The frame rate of the entire game has been improved. We also made slight adjustments and improved the controls as well.

・Less lags are likelier to happen when every participant in the Online Battle have good network connection.
(If you want to find opponents with good connection, set Other > Basic Settings > Network Settings to the very left.)

・Made it possible to press L/R to change the inclination of he map in the Story Mode. Other > Basing Settings will also allow you to fix the camera position as well.

・You can now choose the strength of the COM on the Multiplayer Battle Mode.

・The strength of the Five Dastardly Bombers on the Story Mode have been adjusted.

・The difficulties of Beginner and Normal have been reduced, making it easier to beat them.

・Adjusted the heights and slopes on some maps to improve the visibility.

・If you continue a certain number of times in the Story Mode, you will be able to continue without paying anymore gems.

Additional items will also be released at a later date, including new characters such as Vic Viper Bomber from Gradius, Belmont Bomber from Castlevania, and Pyramid Head Bomber from Silent Hill.

Super Bomberman R launched globally on March 3, 2017, exclusively for the Nintendo Switch™, marking a fitting return for the beloved multiplayer series. All key Bomberman elements return for the new title as players guide their Bomberman around maze-like areas using timed bombs to open walkways and take out opponents within timed sessions. In Super Bomberman R, up to eight players can compete locally or online in the competitive ‘Battle’ mode, or up to two players can work cooperatively in ‘Story’ mode to clear stages in order to save the galaxy.

Super Bomberman R is now available exclusively for the Nintendo Switch™ at SRP of £49.99.

For more information, please visit us at: www.konami.com/games/bomberman.

Thanks to Arturo for the Press Release.