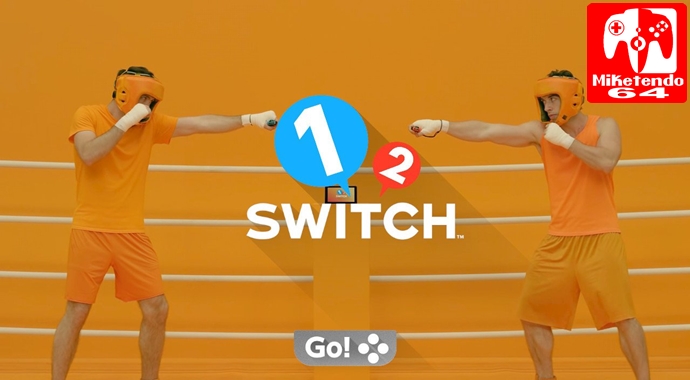 From The Legend of Zelda: Breath of the Wild   to LEGO City Undercover, we have reviewed quite a few Switch titles, but one game in particular we didn’t get round to (other than I am Setsuna, Snipperclips and Super Bomberman R), was Nintendo’s all-new 1-2-Switch, so today we’re going to change that and while our timing may be poor, if anything this review couldn’t have come at a better time.

While sales haven’t been too bad for 1-2-Switch, they could be a lot better since plenty of Switch owners are still on the fence as to whether or not they should add 1-2-Switch to their collection. So for those of you who count yourself among them, get ready for a mildly long diction on just what kind of a game 1-2-Switch is and learn my thoughts on if it is worth its asking price!

As far as gameplay goes, anyone looking to buy 1-2-Switch can expect quite a bit of variation as it is one mini-game compilation that consists of 28 different mini-games and while err of the side of total ridiculousness (I’m looking at you Runway and Shave,) but some of them are actually rather fun. One game that immediately spring to mind are Safe Crack, which sees two players going head to head with a Joy-Con Controller each and having to rotate it as they rotate the dial in their efforts of finding the right spot to crack the combination, Only while most of the 28 mini-games ask you to look each other in the eye, this one you can key an eye on your TV screen/Switch console when in tabletop mode.

Another game that is played in a similar fashion is Treasure Chest. A clever little game that has players with their eyes glued to the screen, as they go head to head in seeing who can rotate their Joy-Con Controllers in all the right ways as they hope to undo the chains that have wrapped themselves round chests of treasure. Not only does this game have a simple premise, but it is fun and enjoyable and one of the games that worked well with the HD Rumble and shows is off even better (much like the Sneaky Dice, Soda Shake and Ball Counting games.) It is also one of the games where you have to put an effort into as you are unable to cheat it.

Why cheat? Yes as expected, 1-2-Switch is a game you can pretty much cheat your way to total victory with and I do say this from experience because for the purpose of this review, I put 1-2-Switch through its paces. I played each and every game exactly as you should, whereas my Player 2, someone who had just recently done their leg in, so they’re unable to stand for most of the games anyway, was sat on the couch and just pretty much shook the remote however she wanted too, giving the game minimal effort and she actually one the majority of the games we played. Now I’m no beginner in the ways of videogames, and she’s no expert, but she kept on winning a lot and when we tried it the other way around, I would win and she would lose, so for me this is a con.

Gamers like a game that will challenge them, even when that game is a party game. It needs to be both fun and challenging and with minimal effort being all you really need to win most of the games, than what’s the point of playing it? but we wouldn’t let that fact stop us from giving 1-2-Switch a proper chance, but the more we played it, the more we came to realise this game just isn’t for us. Yes we had some fun playing it and some of the games can be good, but 1-2-Switch actually feels like a game that would have been better off releasing back the Wii came out as opposed to the Switch. Or even as a WarioWare game. With the things Nintendo have shown the Joy-Con Controllers capable of and the type of mini-games 1-2-Switch has to offer, Nintendo very easily could have made the game a 1-2-WarioWare title instead and fans would love it! It wouldn’t matter if it wasn’t a pack-in title, Switch owners would go crazy over it and it would sell, but we don’t live in the world where that happened, we live in the one where 1-2-Switch exists, and I suppose I should talk about it a little bit more.

So if you haven’t read anything you don’t like and are still considering giving 1-2-Switch the chance you feel it deserves, firstly, good for you, and secondly, here is some more reading for you then. Although there are 28 games in total, when first playing there are only a handful of games available as a means of easing you and your friend into it, but just as soon as you’ve played enough of the games, the rest will soon open up to you, including Team Battle, which is exactly what it sounds like. It is a mode in which there is a group of you and you can divvy yourselves up and take it in turns playing the games, going head to head with the other team, in a bid to see who can reach the goal first.

But if there’s only two of you, then you can also just stick to selecting which game you want to play, when you want to play it and should you find yourself choosing a bad one that you don’t like, well you can also hit the “+” and “-“ button to bring up the menu and scroll across to the next game and if you don’t feel like choosing a game, you can always rely on the Switch Shuffle to choose one for you! Do bear in mind though that if you care about your image and how others see you, this is one game that will can make you feel embarrassed, so only playing it with those you feel comfortable around is recommended, or if you’re of the legal drinking age, have a bit of liquid courage and you’ll be good to go. Also as for learning the controls to each game, get ready to sit through some of the cheesiest tutorial videos you’ve ever seen for the demonstration vids are packed full of cheesy and smarmy grins that I felt added nothing to the game and would have been better off being done another way, but that’s just me.

If I am coming across as flat-out hating 2-3-Switch, I don’t mean to, as it is an okay game, but there is a reason why 1-2-Switch has met the criticism that it has and it is because it is criticism that is rightly deserved. While 1-2-Switch is a party game that can be thoroughly enjoyed when playing with the right group of people, sadly now everyone knows the right group of people and despite Nintendo’s reasoning, 1-2-Switch would have been better off been packaged with the Switch as a pack-in title, but unless Nintendo suddenly get the inkling to do a 1-2-Switch bundle sometime later on down the line, it’s rather doubtful such a thing would come to pass.

To answer the question I brought up near the beginning of this review, no 1-2 Switch is not worth the full asking price. It is an above par mediocre title at best, which had some good ideas, with some being poorly executed, but if you find it somewhere where it’s available at a huge discount (like I did at a clearance sale where it was available brand new at half the price,) it is worth a punt since it does do a good job of demonstrating what the HD Rumble can do. So without any further ado and with all of the above in mind, I do of course score 1-2-Switch a 6/10. 1-2-Switch is a decent effort on Nintendo’s part, but it could have been a lot better with some better ideas executed as opposed to the bad ones that made it in, had the video gaming giant wished to make it so.