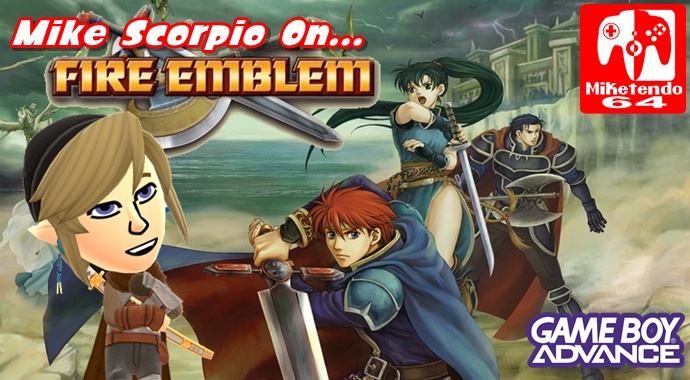 After the release of Fire Emblem Heroes on Android and iOS Smart devices, I have reall been addicted to it. I thoroughly love the strategy of the game, the weapon triangle and the abundance of characters at your disposal that picking the right team can really give you an edge in battle. Like I have mentioned before in our “Fire Emblem Week,” I have never played a proper Fire Emblem game and I decided that after playing Fire Emblem Heroes and falling in love with it and with the advice of some of our readers to give it a go, I downloaded Fire Emblem (GBA) From the Wii U Virtual Console. So After playing it for a good few hours (I think I have invest 4 hours so far) I am ready to share my thoughts on Fire Emblem.

Oh my gosh! Fire Emblem is a great game to play, I missed out playing it the first time round as I have always been a home console gamer and never really ventured onto handhelds or even touched a Gameboy Advance in my life but after playing it via Wii U Virtual Console, it ia an absolute gem to play. Though the graphics are dated now, it is still enjoyable to play and the story helps move the gameplay along but it is the gameplay that makes this game something worth playing.

Fire Emblem Heroes is a good representation of the series and is adapted well to mobile devices but Fire Emblem is so much better. The maps are larger, you can control more units and they can move further at a time and each unit has a variety of options and ways of attacking the enemy.

It is so much fun and with the added ‘quick save & quick load’ option with the Wii U Virtual Console, mistakes can be rectified quickly without having to repeat the whole battle again. The perma-death functions of the game really does make you think of how and where to place your units and that sacrificing a unit just to win the current battle may cost you sometime later during the game.

The Humour of game is great and even though the game’s subtext is quite dark. Sain is a loveable rogue who makes light of any situation and is quite a horn dog if you think about it but this is a game after all, let’s leave the sexual subtext of the game to fan fiction. Lyn on the other hand, is the drive to keep going no matter what hardships you find in the game. Honest and sincere with a heart of gold, you feel honoured to share this experience with her and you want her to succeed in her journey, no matter the odds.

To my surprise, I thought I was playing the first game of the series but it turns out it is actually the seventh title but the first to be localized to the West. Now that I have the Fire Emblem Bug, thanks largely to Fire Emblem Heroes (I guess Nintendo’s plan to create more FE fans is working) I will definitely be looking out for more Fire Emblem titles to play