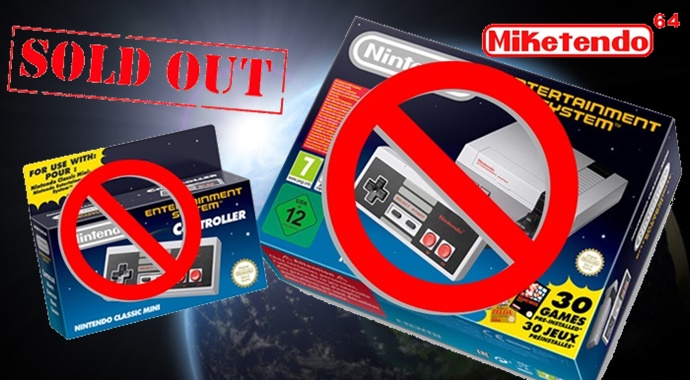 Oh My Giddy Aunt! I can not believe that in less than half a day, All major videogame retailers around the world are completely sold out of the Nintendo NES Mini. Granted there may be one or two slightly obscure stores or online outlets that may have a few to offer but the fact that all over the world, people have gone nuts for a console that originally launched 30 odd years ago is incredible. If you were one of the lucky few that did manage to get it on pre-order either from the big N themselves or via another outlet then today is an exceptionally good day for you. For everyone else, like me, we won’t be getting the console anytime soon until it is back in stock, which then raises the next question, when will it be back in stock?

As a long time Nintendo fan, I am thrilled for Nintendo making a huge sell out on the NES Mini, I just wished there were more consoles available rather than heading to all my local electronics stores and being told first-hand that the NES Mini is either reserved or sold out. Anyway, that’s just the way life is sometimes and for all those scalpers out there that are already putting a €100+ mark up and selling the console again on ebay or Amazon, You guys suck! It’s one thing to do it to amiibo, but now it’s on our own Nostalgia, Shame on You!