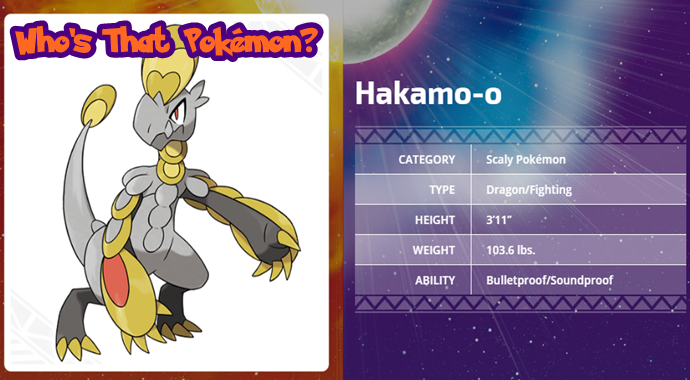 Welcome back to Who’s That Pokémon? the feature series regarding the Pokémon we can expect to see in the upcoming games. From Rowlet to Tapu Koko, and Drampa to Ash-Greninja, we have covered them all, but now we have another eight Pokémon to cover, so get ready for another instalment of Who’s That Pokémon? We dedicate this edition to Jangmo-o’s evolved form, Hakamo-o!

Description: “When a Jangmo-o evolves into Hakamo-o, it breaks from its fellows and begins to live on its own to train itself. Wherever it can find Pokémon to battle against, it seems to appear.

Hakamo-o dances before battle to show its strength, clanging its scales together to make them ring out. When this dance reaches its climax, Hakamo-o bellows a fierce war cry to challenge its opponent.

Its scales make for fine armor, so Hakamo-o doesn’t worry about self-defense as it makes multitudes of strikes and overwhelms its opponents. But, as a result, its scales often become damaged and get torn off. They grow back immediately, so this does not cause Hakamo-o undue concern. In fact, it views the number of lost scales as proof of how ferociously it has fought, and it brandishes its bared arms in a boast of victory.”


Categorised in: Pokémon Sun & Moon, Who's That Pokémon?